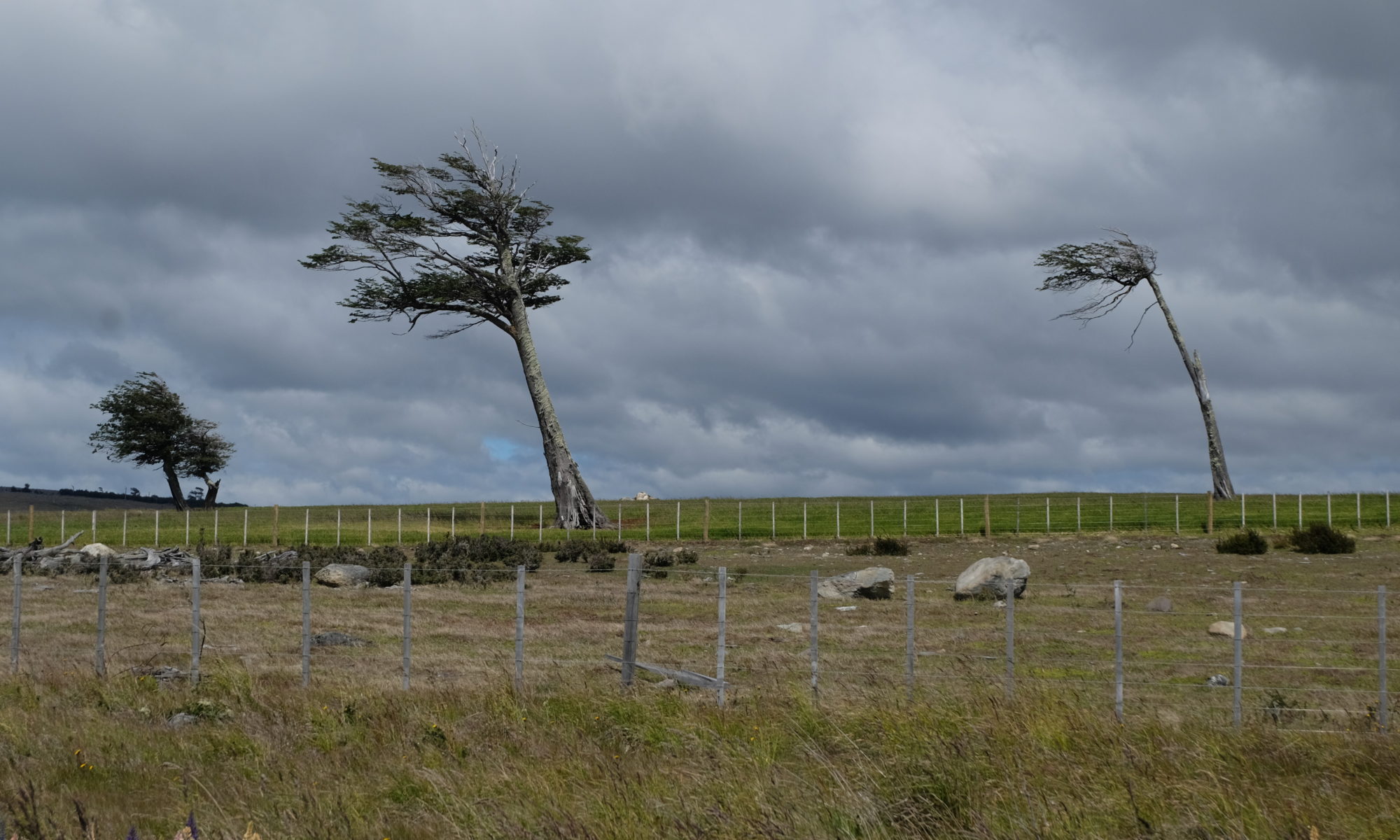 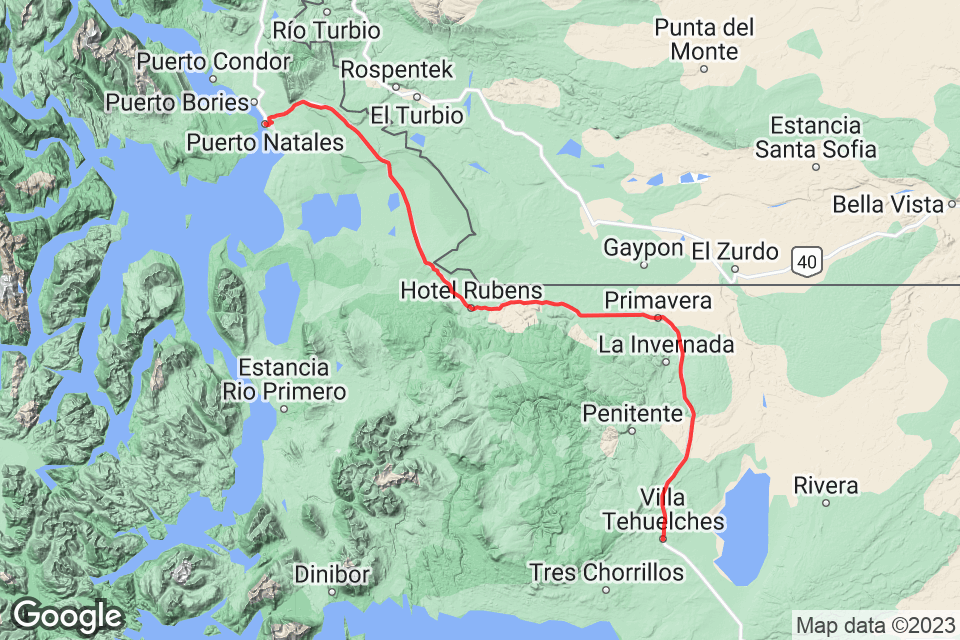 Planned for today is a long ride to Villa Tehuelches. It was not too hard at first with just small climbs and favourable wind. The middle part up to Morro Chico was especially nice with a good tailwind. Here I met two others heading north, both on long tours that are very different from one another. There was occasionally some rain and light hail. When the road turned south again at 100 km the ride got harder. I was climbing for quite a while and I had headwind some of the time.

After 147 km I reached the tiny village, where I planned to sleep in the waiting room of the bus stop, as others did before me. However, one of the doors was glued shut and the other had no handle, so that failed. My second plan was to ask at one of the nearby cafés if there’s a place to sleep, but they were closed.

Then a few children playing in the nearby playground approached me, since they saw me try the café doors. They took me to their grandma, who offered me food in her house where the whole family was gathered. I got an overload of tea, cake and cookies. They even gave me some to take with me. Thanks, that’s very Christmassy of you. When I asked where to sleep they pointed me to the police station, where the officer on duty told me to sleep in the last of a long line of horse stables in front of the rodeo arena. This stable had no carpenter or virgin with a newborn child, nor were there three kings visiting. I did see a large flock of sheep that were driven together earlier that day, so shepherds were nearby.

Here in the south the gaucho culture is very popular and many villages have a rodeo, though you would of course have to time things just right to actually see one in progress. The rest of the year the stables are empty and the floors are clean. The doors face southeast, so a great place to spend the night. The last stable is used to store some tools and straw, but still has plenty of space. There is even working electricity in every stable. It appears to me that this village is not on the grid and so a large generator is audibly running at the edge of town. I also had some wine left from a few days ago to enjoy that evening and since I could recharge my phone overnight I listened to podcasts for quite a while. The new charger works, but it’s extremely slow. Yet a slow charger is better than no charger and I’m almost done here, so it’s all fine with me. 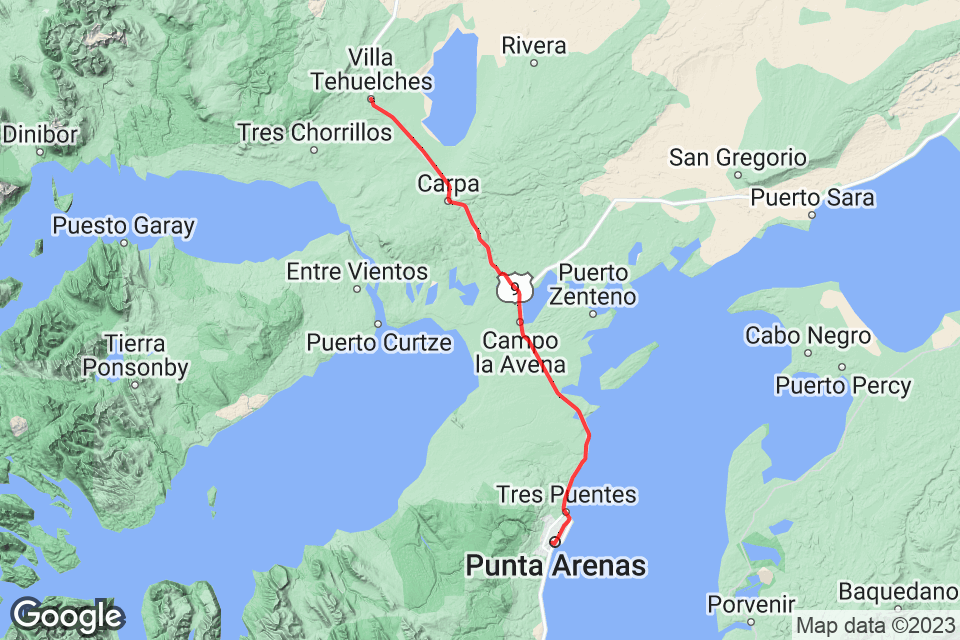 On Tuesday morning my bike computer had decided to move itself to a very different time zone (UTC -12 I think) and so it was displaying the wrong time. I left at 8:21, but it claimed it was just past midnight. I think its internal time zone database does not extend this far south.

Other than that it worked well and just look at the average speed it recorded! Before I entered Punta Arenas it was slightly over 25 km/h, but in city traffic you just can’t keep that up. That’s what I call smooth sailing. Quite literally, as I had a reasonable tailwind almost all the way. The road wasn’t too busy and after a little bit of climbing at the start it was all flat or downhill.

When I joined the road to/from Río Gallegos it got busier, but most of the extra traffic was going north, so not really a problem. At the airport the road became much busier, but it also became double lane with a divider in the middle. Wait what? I think I haven’t seen one of those since Mendoza. Anyway, that made the overtaking much easier, and yet some drivers insisted in not moving sufficiently far to the left, but passing quite close instead.

In the last 10 kilometres it started raining. The last time I had serious rain was a long, long time ago in a place far, far away. I had some rain near Bariloche, but really Tucumán in my first week in Argentina is more like it. I had already decided to go to Hostal Indepencia, where most cyclists go. However, my phone’s touchscreen doesn’t work well in rain, so I had to find it without help. I was doubting whether I hadn’t missed my turn, but it worked out fine. There are some people camping in the front yard and many bikes parked there too, which are a mix of touring bikes and the hostel’s rental bikes.

After resting for a bit I walked to the shore, where there was some shipping activity and I caught my first glimpse of Tierra del Fuego across the Strait of Magellan. My tour on the South American mainland is now complete except for a short ride back to the ferry terminal. After a rest day I’ll cross to Tierra del Fuego for the final section of the ride to Ushuaia. Even though I rode just two days since my last rest day I’m quite tired now, so I don’t mind having some more near the end.

Wednesday sees another early start despite being a rest day, since the excursion I want to do today leaves at 6:30. After some delays at the start we headed out onto the Strait in a boat to visit Isla Magdalena, which is home to a large colony of Magellanic penguins. The boat ride was good with many birds flying nearby. Much cuteness and clumsiness was present at the island, though I also saw a few penguins running quite fast on all fours after getting in a fight. In addition to the penguins there were also many gulls and some skuas that steal the penguins’ eggs or small chicks for food. By now the chicks were almost as large as their parents, so this was unlikely to happen. After that we sailed close to Isla Martha to see the sea lions living there. Everyone sat on top of the boat to better see them. A very interesting morning altogether.

International food is hard to find here, with the exception of pizza, pasta and sometimes sushi. So when I saw there’s a place here that has Asian food other than sushi I had to have lunch there. I spent much of the afternoon resting, since I hadn’t slept much lately and cycled a few long days. When I went food and fuel shopping later, some of the others at the hostel were boxing their bikes, so their tours are over. I still have about a week of riding left. At the restaurant that evening the server kept calling me caballero. I had a very good meal of shrimp and a T-bone steak with Casillero del Diablo. That’s one of the more popular wines in Chile, but I hadn’t tried it yet, so since this is likely the last restaurant I visit in Chile it was about time.