At the top was nothing but a very windy and flat landscape, which slowly started to descend. By now the wind was variable between tailwind and crosswind, but still generally good and so I easily completed the 95 kilometers to the point where I leave Ruta 40 again for a while to take a shortcut. The main road continues southeast and then swings back west. This is about 100 kilometers longer and the prospect of riding 80 extra westbound kilometers doesn’t sound too appealing to me.

Thus I entered the 70 km section of ripio which heads more or less south and connects back to Ruta 40 at the other end. The landscape was still open and more or less flat. I soon met a Danish guy heading north who had been riding this road all day. Then the road turned into the wind for a bit and went up a small climb. This is where my tiredness got to me and so after 116 km I set up camp behind a small hill. I thought that should mostly shield me from the wind, but it may not be such a good site after all. There is still quite a lot of wind hitting the tent.

Since I hadn’t had a chance to properly charge my phone with the new charger I still had no entertainment and thus lay down early. When I woke up in the night the wind was completely gone. Later I woke up again and saw the sun was about to rise, so I got up to take a few photos of camp and then quickly got back in my warm sleeping bag. In hindsight it might have been better to pack right then at 5:30. 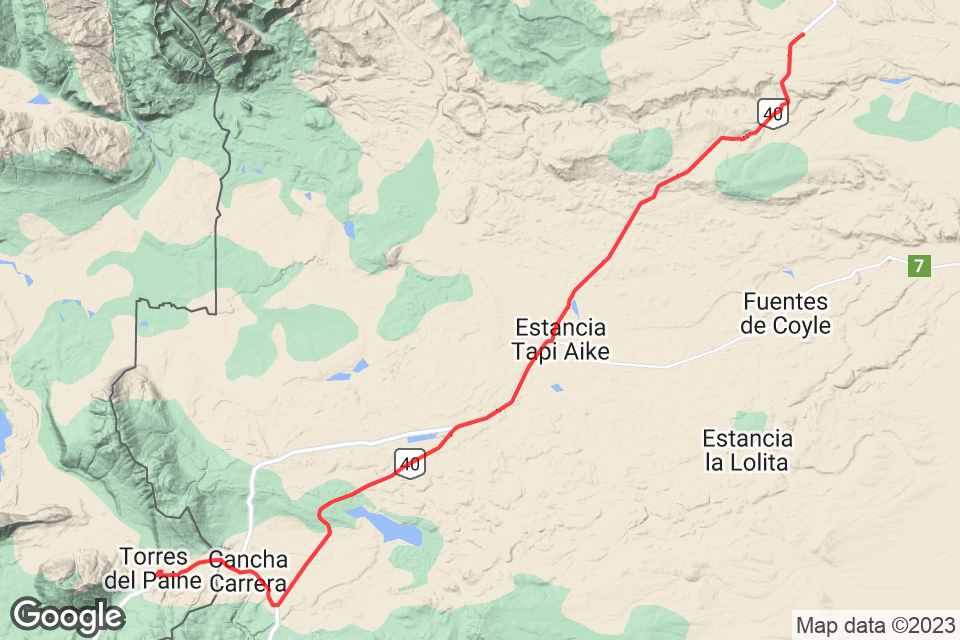 What a day this was! While the wind was my best friend yesterday, it was my arch nemesis today. My goal was to go about 100 kilometers to Cerro Castillo just across the border in Chile. I eventually got up at 7 and left at 8:10. When I pushed my bike onto the road I already saw two people who had just passed and were also heading south. I soon caught up with them and they were the two people I didn’t stop to talk to yesterday. They had slept in the police station, which was unmanned (not sure if abandoned).

They started at 8:00 in an attempt to beat the wind, but that was already starting up, so that failed. The wind was blowing from the west and thus against us almost all day. They were also shooting for Cerro Castillo, but seeing how hard it was for me I highly doubt they made it on their upright bikes.

It took me only 4 hours to complete the 42 remaining kilometres of ripio. The first part was good, but later there were some sections where you had a choice of bumpy, loose stones or both. The road was also going up and down and the wind was still getting stronger until it reached full on Patagonian levels. There was the occasional drop of rain, but you may take that statement literally. Even adding a pair of thick socks didn’t help to prevent me from getting cold feet.

When I got back to Ruta 40 in Tapi Aike, a settlement consisting of a petrol station, a police station and a road maintenance workshop, the riding didn’t get easier. I now turned fully into the wind and the road was also often climbing. The wind bothers me less on my bike, but the climbing is still equally hard and eventually the wind wears me down too, it just takes longer and I can go farther before it happens. Thus, my 10 km/h average didn’t improve one bit on the road. I met a few others going the other way and enjoying the good winds, including a Russian couple travelling to Peru with a two-year old child on the back seat.

Eventually there were some bends in the road and so I had a few kilometers of easy riding before going back to climbing, with a crosswind this time. This is where I finally could go a bit faster and soon reached the turnoff to the border, leaving Ruta 40 for the last time. The path was good ripio and mostly descending to the Argentinian checkpoint. The lady at the counter spent a long time looking puzzled at her computer. Maybe my analog entrance at Lago del Desierto hadn’t reached her system yet? The customs officer on duty didn’t say one word to me in his official capacity, he only wanted a picture of my bike to send to his colleagues in Buenos Aires.

The border between Chile and Argentina goes over the highest peaks of the Andes, where the waters divide, so I was slightly climbing until a paved road suddenly started and went down again. I didn’t know such a thing is possible, but the wind on this side may be even ridiculouser (yes, I decided that is a word). Are you getting tired already of my writing about the wind all the time? Well tough luck, it’s the main concern down here and it’s here to stay.

It was about 10 kilometers riding to the Chilean checkpoint. A bus load of people returning to El Calafate after a day trip to Torres del Paine was waiting to leave, but they all quickly got processed and I was soon done with immigration as well. At customs were a few people who didn’t have their car’s paperwork in order and they spent a long time arguing with both officers, so a line quickly formed behind me. When it was my turn and I said I’m on bicycle they let me continue without having to register it. The people in charge of the food inspection quickly checked my bags and found no contraband (mermelada/jam is allowed, it seems like only fresh fruit and veggies are forbidden) and so I was through. They too were interested in the bike and how well it works with the wind.

From the checkpoint one immediately enters the village of Cerro Castillo. There was a sign announcing a hostel and after 10 hours in the “saddle” I decided I earned it, though the price was right at the upper limit of what I told myself I would pay. Getting dinner was a bit of a problem. The hospedaje offers it, but the dining room was packed when I asked, so the lady told me to try at another cafeteria. When I walked around the village all the other places were closed, but upon returning to the hostel the eating room was mostly empty and so the lady asked if I wanted to eat. It was a yes or no question, no choice about the menu, but I didn’t have to think about it for one second. It was pasta, but with a different sauce than I usually make, including real vegetables and meat. And then there was even salad, which in Argentina and Chile usually means tomatoes, lettuce and maybe onion.

As I get back to Chile I noticed another peculiarity: If someone walks into a restaurant where people are eating they will say “buen provecho” to the room in general. Returning to Chile also means that Fanta and Sprite are no longer good for use on the road, because they contain “reduced sugar” to avoid the health warning on the package. The cheap brands have even less calories, so the only option left to bring is Coca Cola, despite my not really liking it. 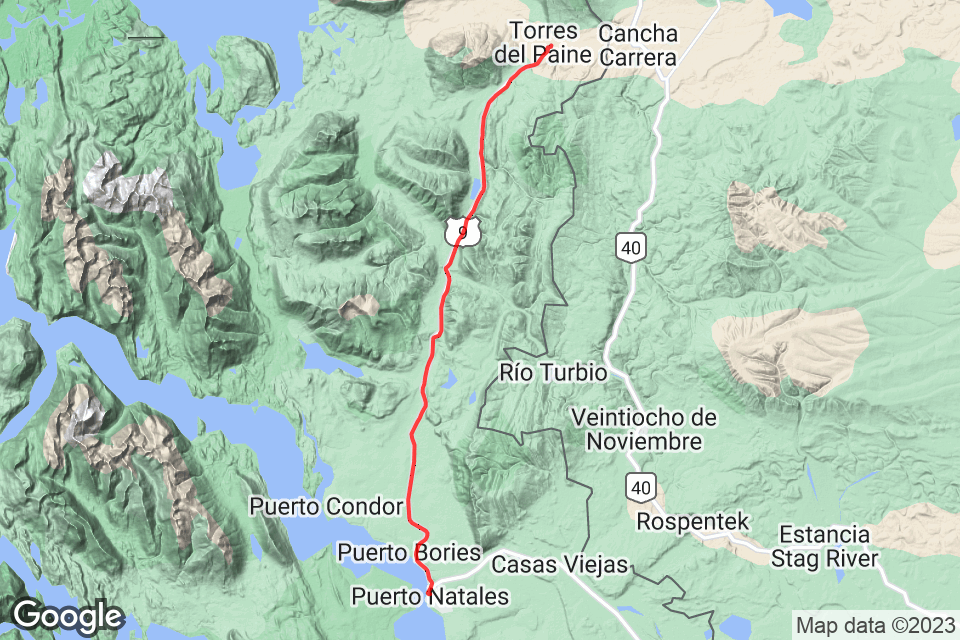 60 kilometers are left to Puerto Natales and they should be much easier than yesterday. As I left Cerro Castillo to the southwest I still had some head- and crosswind, but soon the road turned south into a wide valley. Strangely enough the wind mostly disappeared and what little wind was left was often in my back. The road was slowly climbing until about the half way point, but not much of a problem.

The second half was downhill and on an open plain next to the fjord, so the wind returned in full force, but most of the time it was helping me along. Even when I was heading more or less into it I was doing fine.

Thus I reached Puerto Natales just before 13:00 and got a hostel for the next two nights. This may not be the most interesting town in the world, but I could sure use some rest now. I had lunch at a restaurant serving local food. The daily menu consists of seafood soup, pork with rice and half a peach for dessert and all that for $4000. The soup wasn’t even the watery affair that you often get here, but full of seafood and fresh vegetables.

Sunday I walked along the shoreline, which was quite interesting. For lunch on this day before Christmas I finally had Patagonian lamb. You just can’t visit deep Patagonia and not try that one, unless you’re a vegetarian I guess. However, many restaurants only offer it for two people, so I hadn’t gotten around to it yet. Until now. I got a few ribs and a shoulder, and it was great! There is no fooling oneself about the fact that this meat used to be an animal, given the way the whole lamb is traditionally prepared on the cross above a wood fire. I later learned that this is a traditional Christmas food here, so that makes it even more fitting.

That evening, i.e. Christmas eve, I went to “the” bar in town. As I was walking there, the church on the main square was blasting seasonally appropriate music into the streets before the start of Mass. At the bar I had a pizza and a few beers, but didn’t find good company and so I returned to my hostel relatively early. Just as I got there I saw two guys coming out of a shop who kept looking at me and I thought I heard my name. They were wearing hats and so I didn’t recognise them, but they were Tim and Timo, whom I had last met in Coyhaique. They went to a restaurant for dinner and I joined them to have a talk and some beers, despite having eaten already, and Katherine joined us as well. So in the end we had a great Christmas eve.

One Reply to “An Aeolian Adventure: El Calafate – Puerto Natales”