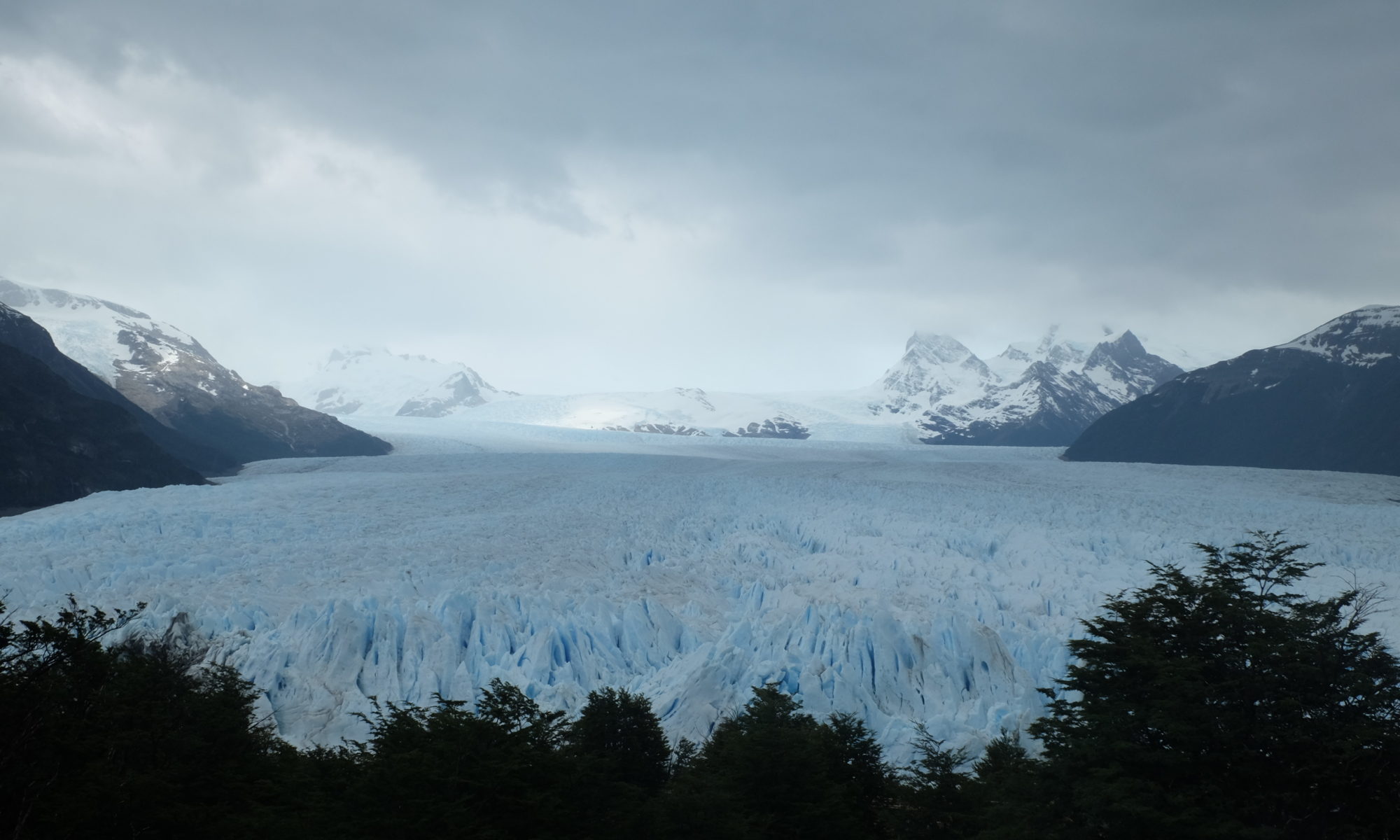 Thursday evening I went to one of the many microbreweries, where I ate locro, a vegetable and beef stew. It reminded me a lot of Dutch pea soup and the weather outside was horizontal rain and cold, as it should be with a meal like this. 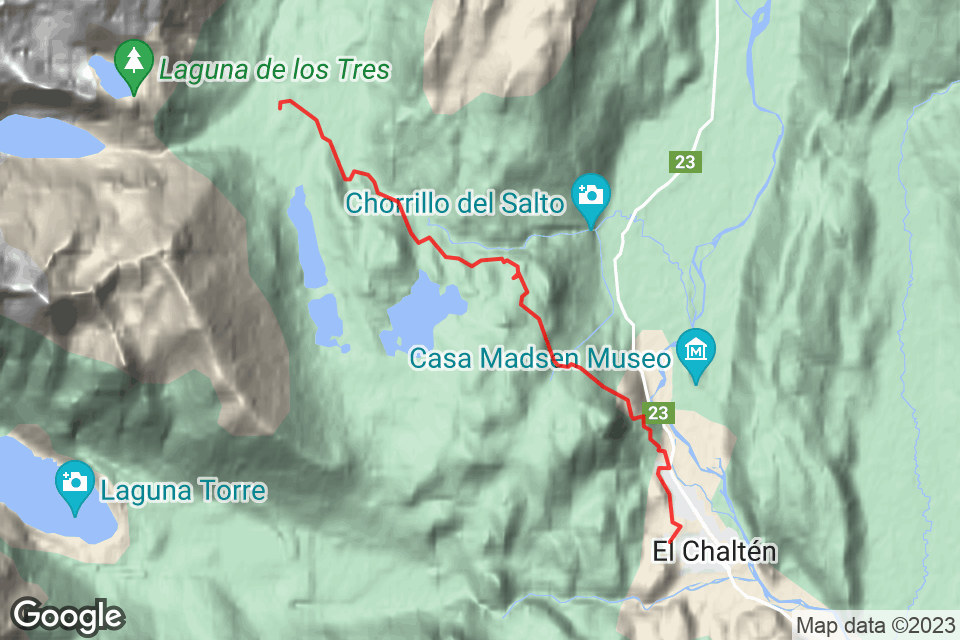 Note: This is a hike, not a bike ride.

The weather predictions looked reasonable when we set off for our hike on Friday afternoon. At the time there was the occasional bit of rain, but otherwise it was fine. The path quickly climbs a few hundred meters and then stays flat most of the way. Up there the wind became a factor, with some strong gusts every now and then. Friday’s goal is the camp site at the foot of the final climb to Laguna de los Tres, which we reached at about 18:00. This was just in time: As I finished setting up my tent the rain started in earnest, so we were soon forced inside.

When the rain let up a bit we walked to a nearby viewpoint of a pretty impressive glacier, but the weather soon got worse again, even including light hail. The glacier looked good from a distance, but it was hardly visible in this weather, so we quickly turned around and spent the rest of the evening holed up in our tents. The temperature during the night tested my sleeping bag to its limits. It’s not rated for very low temperatures and with the insulated pad, silk liner and the clothes I was wearing inside I barely stayed warm. 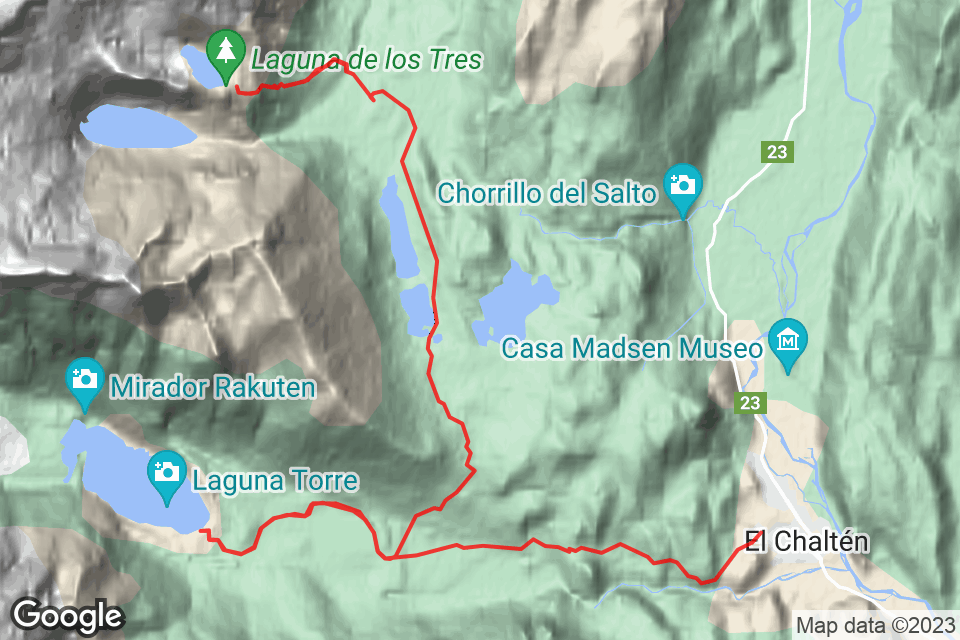 Note: This is a hike, not a bike ride.

We got up at 4:15 for the last bit of the walk. It was lightly snowing as we began, but it melted upon touching the ground. Soon the path becomes extremely steep and completely open. This makes for great views, but it’s also very hard when it gets windy. Luckily yesterday’s wind had completely disappeared. As we climbed higher the temperature dropped and the snow stayed for longer. Climbing in the dark through an increasingly snowy landscape was quite the experience. At some point I turned around and I saw an animal on the path behind me. First I thought it was a puma, since signs were warning about their presence, but looking at the pictures now it’s probably some kind of fox. It was staring at me, so I stared back until it got bored and left.

At the top was about 30 cm of snow and I reached it just in time for the main event. Sunrise at the laguna with Fitz Roy in the background is supposedly very special. Unfortunately today the mountain was covered in a thick layer of clouds, as it often is. The sky to the east was mostly clear though and the view over a partially frozen valley with a river and a few lakes was very impressive, so it was still a good sunrise. Most of the people who were there at sunrise had already left when I saw two condors leaving their nests, flying around us and off to the north.

Back at camp I noticed ice on my tent, so that explains why the sleeping bag was only barely warm. The clouds occasionally got thinner, offering hints of Fitz Roy’s outline, but as far as we’ve seen it stayed hidden all day. At 9:00 we continued for the second part. The walk to Laguna Torre was quite easy and offered some different sights again, including a rather large river of glacial melt water and a rocky field.

At the far side of the laguna is a big glacier and in the water were a few small icebergs. Cerro Torre and its sister peaks were also hiding all the time, but the glacier and the other mountains surrounding the lake offered an amazing sight as well. From here it was another 9 km back to El Chaltén and some rest. Despite the clouds surrounding the mountains it was a nice hike with good enough weather most of the time.

The last section of the ride from El Chaltén to Ushuaia is mostly paved and has much less elevation gain than the previous sections. The riding should thus be a lot easier than the Carretera Austral. But that’s of course ignoring one important factor: Patagonian weather and in particular the wind. We get out into the open now where the wind has free play. Because of global weather patterns it circles Antarctica from west to east and southern Patagonia is the only land at this latitude that it slams into. This means that the wind is always extremely strong here in the far south. 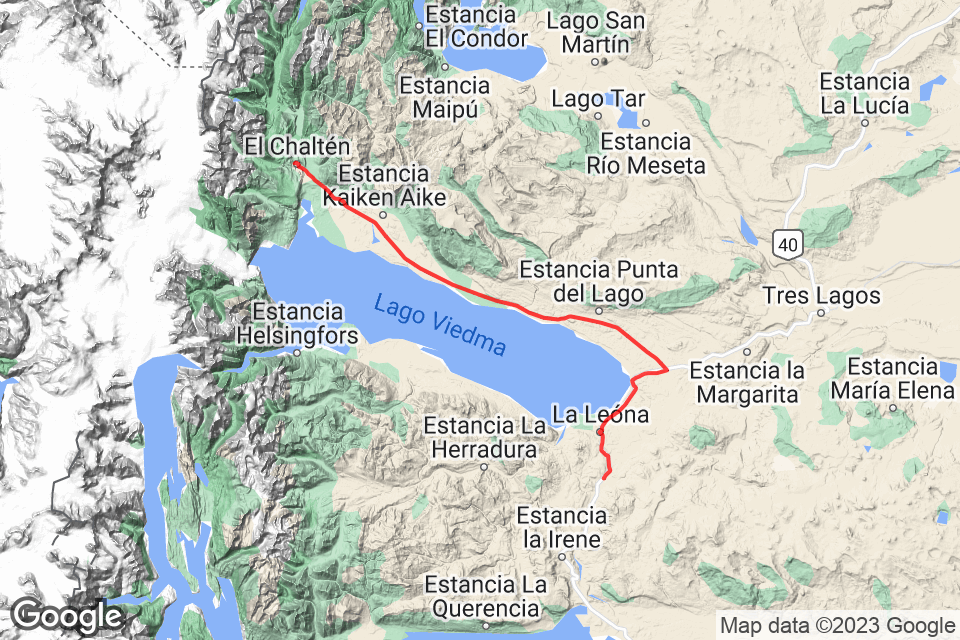 Sunday was no exception, but as long as the wind direction is also normal (i.e. from the (north)west) it shouldn’t be a problem. When we were ready to leave we got word from Bata that a massive mudslide happened in Villa Santa Lucía, where I entered the Carretera Austral a few weeks ago. Many people are dead and/or missing, a number of buildings were destroyed and all roads are blocked for at least a few weeks.

We left El Chaltén with a good tailwind, which easily carried us the 90 kilometers east along Lago Viedma to the junction with Ruta 40. That’s right, I’m back! The landscape is very different than on the Chilean side. As said it’s more open and it has some small slowly rolling hills. On this section we also met another recumbent rider, the first one for me on this tour, though people I met mentioned the presence of a few others nearby. He was working his way west to El Chaltén, starting from Ushuaia, and seemed to be doing quite well.

When we got to Ruta 40 and turned west for a bit the wind was straight in our faces and about storm strength. I could keep going at about 13 km/h, but William slowed down to 7. See people, that’s what a recumbent bike is good for, in addition to the added comfort. OK, William went faster with the tailwind, but I went fast enough without having to pedal, so I don’t care if I go 25 or 35 km/h for free. To avoid going too fast into the wind I just stayed behind him most of the time.

Some 5 kilometers later we got back to the shore of the lake and the road turned so the wind was now from the right. Initially that was all fine and dandy, but later the wind got so strong that it completely blew William out of his lane. I would just be blown at most a meter to the left before I had time to correct and get back to my line. Even the presence of a simple guardrail helps keep me out of the wind. I am low enough to be in the turbulent air behind it, where I notice there is wind, but I can’t tell which way it’s blowing. One section in particular was very bad, even when stopped it was hard to stay upright and standing still. We made it through this though and soon left the lake behind and with that the wind became more reasonable as well.

At 18:00 we made it to one of the more famous bike touring shelters: The Pink House. This building and a few others near it are abandoned and this one in particular has all interior walls covered in messages from people who stayed here before us. The landscape offers very little shelter from the wind, so this is one of the few places where one can stop between El Chaltén and El Calafate. 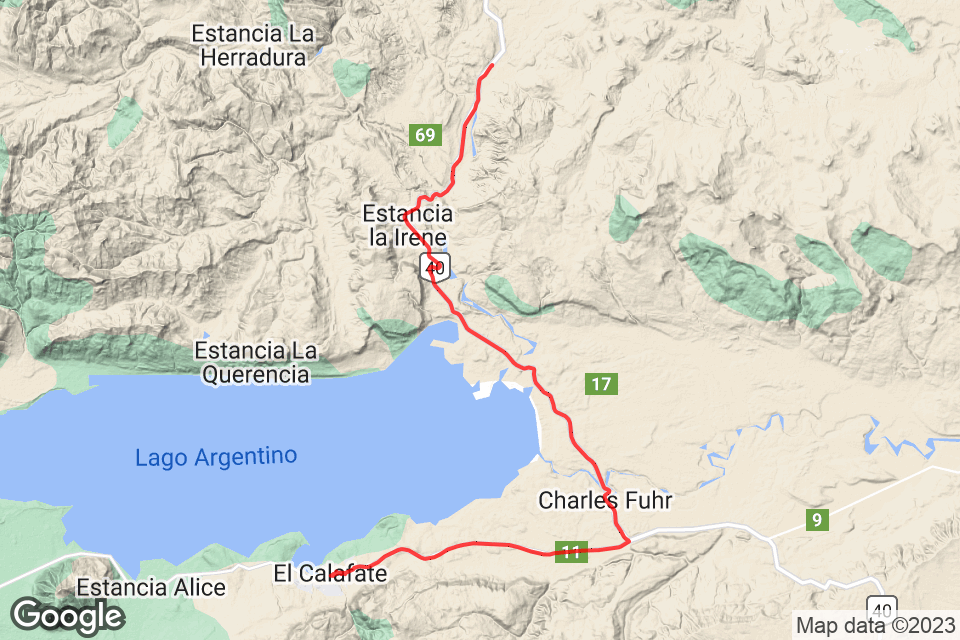 On Monday we continued south for a while, with generally less wind than yesterday and the direction was not too bad. There was one climb worth noting, but otherwise we easily made it to the junction where we turned west to El Calafate.

In other news: I’ve been looking at my schedule again. When making it I built in a few days of slack so I wouldn’t get in trouble if I ran into some minor setbacks, but now that I’m nearing the end I still have them. I will probably get rid of it by adding rest days in Puerto Natales and Río Grande, just a few days out from Ushuaia.

On my rest day it was time for El Calafate’s main attraction: Perito Moreno glacier. This is one of the largest glaciers in the region and certainly one of the more accessible ones. A bus transfer took us there and then we could use a number of boardwalks to view the glacier from several different angles. It is about 5 kilometers wide and 40-70 meters tall above the waterline at the front. It is a very impressive sight from up close and it is constantly cracking and rumbling.

You can get as close as is safe, since sometimes large chunks of ice fly away for dozens of meters when a large piece breaks off. I was lucky enough to witness two of these events, one right in front of me. The weather was not that great, with clouds all day and the occasional bit of rain. Perhaps the most notable was the absence of wind today.

Back in the city that evening I found someone who will repair my phone until tomorrow. So after a little over a week without it I should be able to use it again. I also have new hose clamps now, which I will try to use on the bike tomorrow.

The repair worked well and should be able to get me to the end. I also visited the Glaciarium, a museum about ice and glaciers that was quite interesting.

When I went to pick up my phone it turned out that they didn’t fix it at all. I now have a charger that charges the battery outside of the phone, but that has some downsides. For example, it doesn’t work with my powerbank, so I can’t charge on the road. I think I can manage with this, but it’s not optimal. On the other hand it’s much cheaper than the agreed price for the repair.

Also interesting is the approach to money here. After eating in a restaurant I wanted to tip 50 Pesos but paid $100 more than was on the check, asking for $50 change. They ended up giving me my $100 back because they didn’t have $50. In a supermarket I had to pay $252 and I only had $300. Naturally they asked if I had 2 Pesos to make the change easier. I said no and they still gave me back $50. So always say no I guess? Businesses not having the correct change or having to search everywhere for it is not unusual at all. And yet Argentina is a mostly cash-based country, so you wonder how they keep working.

One Reply to “Learn to Fly: El Chaltén – El Calafate”