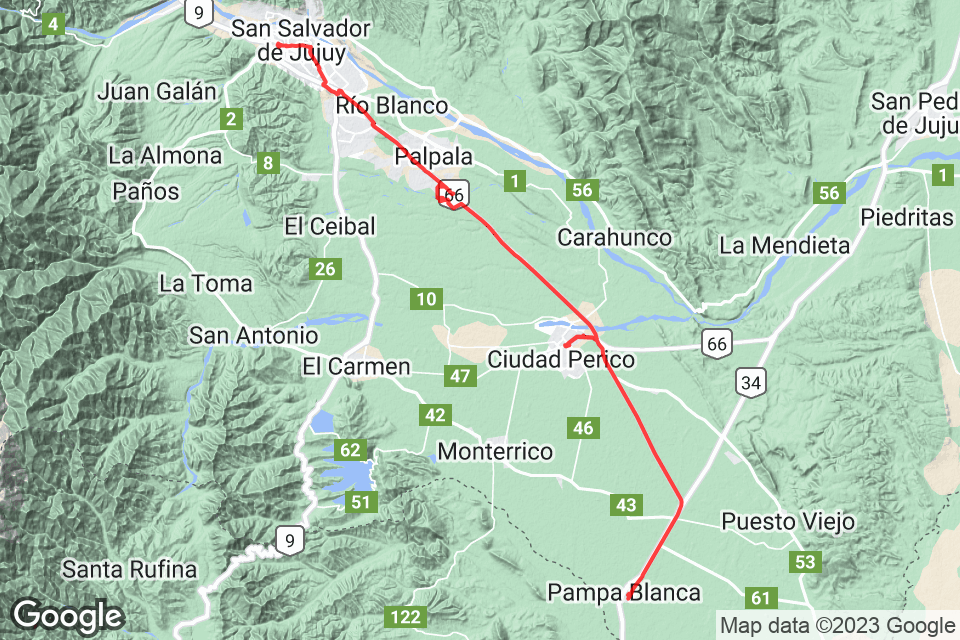 Sunday was not my day. The day started by trying to find my way out of San Salvador de Jujuy. I had to cross a busy highway interchange to get to the road I wanted to take, Ruta 66. After crossing some foot bridges I finally got where I wanted to be. Initially there were collector roads running parallel to the highway on either side, so I rode those.

Then suddenly they stopped. The highway was a busy motorway at this point and it didn’t look very attractive to ride. I looked on my map and saw another road going in the same direction, so I took that. This was a good gravel road and all was fine.

Until I got to a big dry river bed strewn with boulders. Although I couldn’t see it from my location, my map said there should be a way through, so I went in. This was a Bad Decision. I was pushing my bike across the boulders and couldn’t find a way out on the other side. Then a farmer came by with a herd of cows. He said there is a way out closer to the highway. I found a small path though shrubs and up a steep hill, which eventually got me to a road. By now I had decided to take the highway anyway, but there was a fence between the road I was on and the highway, so I had to lift all my stuff over the fence. Thus I had me a bit of an adventure. But it was not over yet, so stay tuned for more after the photo break.

The highway had a good soft shoulder and I was making good progress again. However, I soon had a flat front tire. After some searching I found a big thorn that had penetrated both the protective layer in my tire and the tube, probably from the adventure in the river bed. I quickly fixed it, but soon had a flat again. The patch was leaking slightly, so I patched it again. Only then did I notice a big snakebite next to it, so I replaced the tube.

This second flat happened close to a Gauchito Gil shrine. You see these everywhere on the side of the road in Argentina. Gauchito Gil is a sort of patron saint of travellers and people sacrifice all kinds of things at these shrines. I didn’t know if it would be OK to offer a broken tube, so I didn’t.

Soon after this I got to the town of Perico and I turned off the highway for lunch, which consisted of empanadas and ice cream. When I got back to the highway I could cycle on the highway and I made good progress until the end of Ruta Nacional 66. So despite the bad luck I can say that I cycled the length of Ruta 66 in less than a day!

A bit later the riding got harder and the bike behaved weirdly, but I didn’t see anything wrong. In the next village, Pampa Blanca, I stopped at a small hole-in-the-wall shop for drinks. A man out front told me my rear tire was flat. The lady of the shop offered me a glass of cola on ice and I immediately asked to buy the whole 3 liter bottle.

At this point it was 16:00 and I was pretty demotivated with the third flat of the day. I asked if there was a place to sleep nearby and she offered me a room. I fixed the flat in the shadow of her house. It looked like another thorn, though the thorn itself was nowhere to be found. The lady offered a shower and to wash my clothes. She also put some cream on my burnt face. I watched the Spanish version of Gravity on TV (still the same bad science) and then some Argentinian game shows. At 21:30 she served dinner: almost half a chicken, minus the leg, and mashed potatoes. Thanks a lot Susanna!

I’m now way behind schedule. I progressed only 50 km along the route, so I should try to catch up tomorrow. The weather changed completely. It was very hot and sunny with little wind. 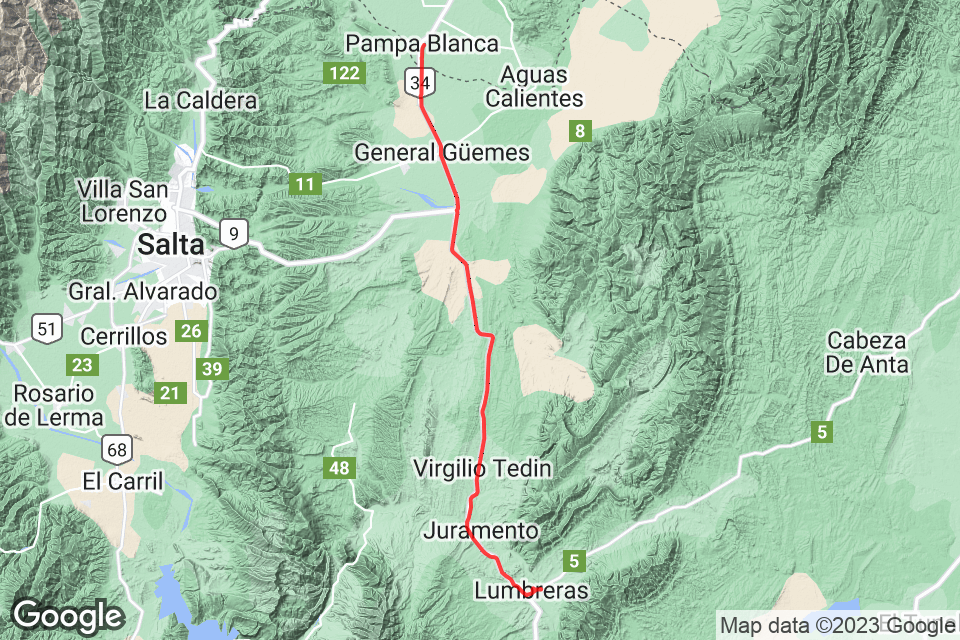 Apparently Susanna is a late riser, so on Monday I had a very late start at 11:30. There goes my plan of catching up today. The first part was nice with a parallel road again, occasionally interrupted at bridges.

Then the highway became double lane, and cycling on the highway was fine. I had rolling hills all day and the climbing wasn’t too bad. There is a long stretch of no villages or anything for 70 km, which I try to cross today. Reaching Metán as planned is impossible due to the late start.

The worst climbs came at the end, but I made it to Lumbreras. I could find no lodging there, only a semi-official campground out of town. This was a nice spot on the river, but there was a lot of garbage. I had to remove a large amount of dirt from inside the tent from my last camping spot back in Bolivia. If I’d have known that I’d be wild camping anyway I might as well have stayed on the highway, rode some more kilometers that day and then found a spot to camp there. Oh well, this was certainly a nice spot to camp out.

I had a good day of cycling with 88 km, but am still behind schedule. 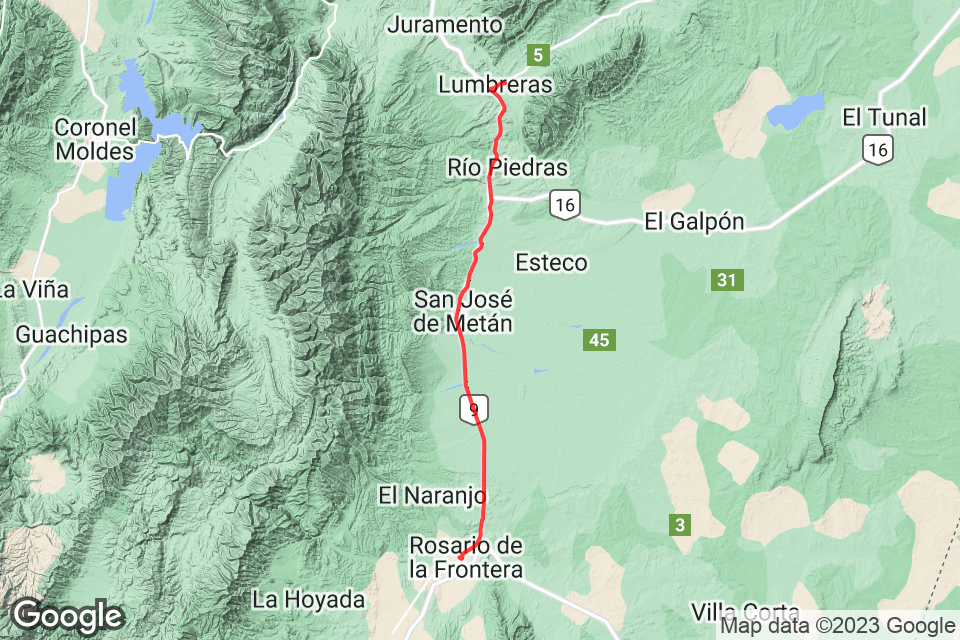 Tuesday started early with some climbing again. From Metán the road turned to flat/downhill. There was another police check, this time the officer only wanted to see my passport. The landscape was the same most of the time for several days: The road lined with trees on either side and some rolling hills.

I reached Rosario de la Frontera after 70 km at 13:00. Question: Shall I do another 60 today to the next village or do 130 tomorrow into Tucumán before the rest day? I ordered pizza and orange juice to think about it over lunch. The pizza was heavy, I didn’t even eat the last slice. This pizza champiñones was not just covered in mushrooms, but in the thick creamy mushroom sauce that you put on your meat. Thus I stopped and got a hostel room. Again I had a large room for myself, which seems to be pretty common here if you ask for a single room at a hostel. This is of course fine with me. 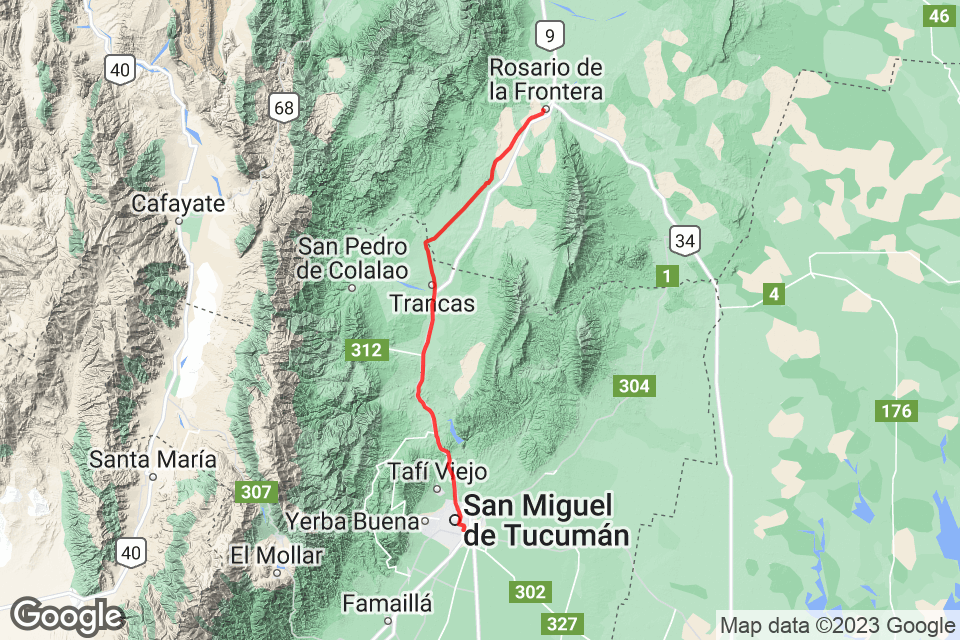 So if I wanted to make it to Tucumán in the four days I planned, I had to do 130 km today. Looking at the altitude profile, this seemed easy.

For the first half of the day I took the old highway, which had much less traffic. The road was good, until after 23 km the pavement quality became very variable: From quite good to nonexistent and it’s-there-but-hidden-under-a-thick-layer-of-dirt. The last 15 km to Trancas were especially bad. The landscape was very open now.

When I got back to the new highway, I first stopped for lunch. Then I saw a parallel road here as well. The old highway again? So I followed that for a while, until it stopped and I was back to riding the highway. This part looked mostly downhill on my map, but in reality it was quite a lot of climbing. However, the climbing seems to be getting easier to me, I’m starting to get in shape.

When the road became a motorway I rode the shoulder until a parallel road started again. At this point it also started to rain a bit. The weather has been cloudy for the last few days, but this is the first rain. There has also been a rather consistent headwind most of the time.

Soon enough I was rolling into town and heading for my hostel through busy city streets. I finally made it there after 136 km and a very long day of riding. My shirt was soaked, so I just wanted a shower.

The Hostal Las Carretas however had something else in mind. Apparently my bike was a big problem and they couldn’t accept it. It took the guy almost an hour and several phone calls to decide I could park it in the car park next door, which was fine with me from the beginning. It’s hidden from the street and the place is either guarded or locked all day. So I guess don’t go there if you have a bicycle.

Thursday was my rest day. I walked the town getting things I needed, updated this blog and generally took it easy. Opposite the hostel at Benjamín Aráoz 121 is a bike shop which stocks a lot of Shimano gear, so if you need parts in San Miguel de Tucumán you might want to check that one out.

The next two weeks I’m heading for Mendoza. I’m going to lower the pace a bit from last week, in which I did more than 600 km. I calculated that I can do 75 km a day on average and still make it to Ushuaia in time with plenty of rest days, at least one every week.