The bus ride from Uyuni to Villazón was long and uncomfortable. I wasn’t told that we had to change buses once in the middle of the night and the road was extremely bumpy, so sleeping wasn’t really an option. We got dropped off at the new Villazón bus terminal at 3 in the morning. Thus I had to wait for the sun to rise and also for the border crossing to open at 6.

I arrived at the border shortly after 6, and after exchanging my remaining Bolivianos for Argentinian Pesos the crossing was easy. The lady at the counter asked me where I was going. Looking at the big sign I could see from there, I answered “Erm, Ushuaia?” The sign read:

So I guess I have my work cut out for me. My route will even be slightly longer than that, about 5500 km. I got a 90 day permit to stay in Argentina and finally I had to put my bags through a scanner. Also, don’t forget to advance your clock by one hour.

After buying some supplies at a supermarket (what is this magic? I hadn’t seen one of those in Bolivia), I started riding just before 9. 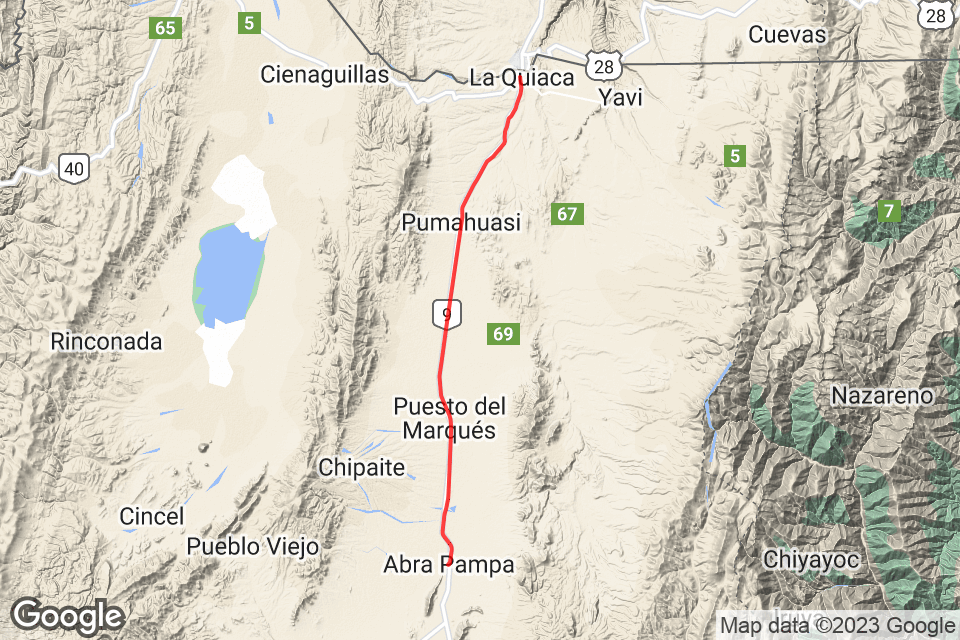 I selected this alternate route which mostly follows Ruta Nacional 9 to give me as easy a start as possible and it sure was pretty easy. The first part was climbing very gently and later in the day the road levelled out. After crossing through a village, there was a stretch of more than 20 kilometers of perfectly straight and level road. After that the road also stayed level but had a few curves. On the side of the road were several wrecked cars, some of which must have been sitting there for years. There was also some roadkill, including a few dogs (don’t worry, no photos).

Thus I arrived easily in Abra Pampa, a rather large village with a nice central square. I walked into a hotel and asked for a room. The owner quoted me 200 Pesos, but since I had forgotten to check the exchange rate of the Peso I had no idea what I was agreeing to. In the end it turned out to be a pretty good price, about 10 Euros.

The first night in Argentina was interesting: As I left the hotel I could hear music coming from the church. After the service started there was also rather loud music coming from inside. I was looking for a bite to eat and so I walked into a restaurant. What I didn’t know is that the national football team was playing Peru that night for the 2018 World Championship qualifiers. Thus the place was packed with people having beer and watching the game. I had a beer and a sandwich and watched the first half. A beer in these parts has to be a full liter or it doesn’t count. Then when I walked back to the hotel there was live music and dancing in the main square in front of the church, so I watched that for a bit. Then I got a good night’s sleep, since I hadn’t had that the previous night on the bus. 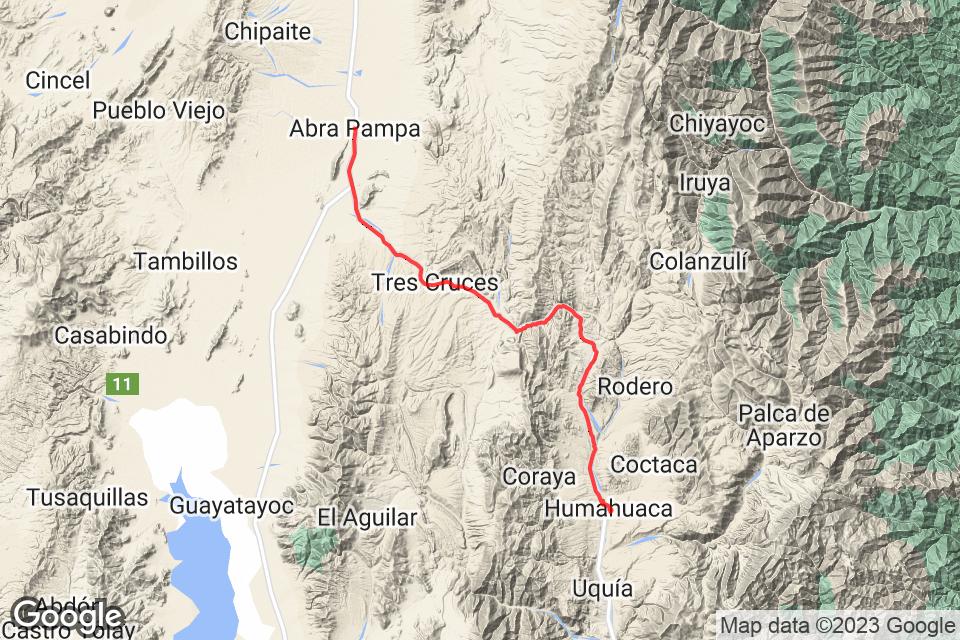 For the first 26 kilometers on Friday I was climbing to the highest point of my new route. Most of the climb was easy, though the final part was a bit tougher. Then I reached the peak at 3780 meters of altitude. This is also the end of my stay on the Altiplano and I will soon be descending to a more reasonable altitude.

The descent did not start immediately, instead staying on a plateau with some rolling hills for a bit. At one point there was a police checkpoint. The officer wanted to see my passport and I imagine he had orders to search everyone’s luggage. He was however not very diligent about executing the orders. After inspecting part of the contents of my backpack he didn’t need to see the rest.

Then the Big Downhill started, which will take me from 3500+ meters down to 400 at the lowest foreseeable point. I was following the Río Grande de Jujuy here, although it was carrying very little water for a river of that name. The width of its bed suggested that at certain times of year it is indeed a great river. The landscapes here were quite interesting, with hills on either side and the river valley winding its way down between them. The rocks were nicely stratified and had many different colours. The landscape reminded me a bit of a more mountainous version of the Wild West.

As I was descending towards 3000 meters, the vegetation started to change. Initially there were only some grassy plants that would grow up there, but later large shrubs appeared, then cactuses and eventually even trees. I hadn’t really realised this until the day before, but on the Altiplano there are no trees whatsoever, except for some carefully cultivated ones, so this was quite the change.

After a pretty easy and at times fast ride, I arrived in Humahuaca, a nice touristy town at 3000 meters altitude. This town also occasionally had a Wild West feel to it. The town is centered around a huge independence monument sitting atop a hill.

Back in Bolivia I was carrying a large amount of cash hidden away at various places in my luggage, since I didn’t expect to see any ATMs after leaving La Paz on my originally planned tour. Out here every decently sized town has an ATM, but most of the time there is a fairly long queue of people waiting to use it.

I already like the food in Argentina. I discovered the sandwich lomito, which contains a piece of beef, ham, cheese, a fried egg and lettuce. Then I went to a nice restaurant in the evening, which offered a 3 course meal for a good price. I got empanadas for starters. I heard a lot of good things about these and I have to agree. These are awesome! The main course of llama meat in potato and vegetable stew was ok. The local wine is very good and cheap at 60 pesos for a half bottle. 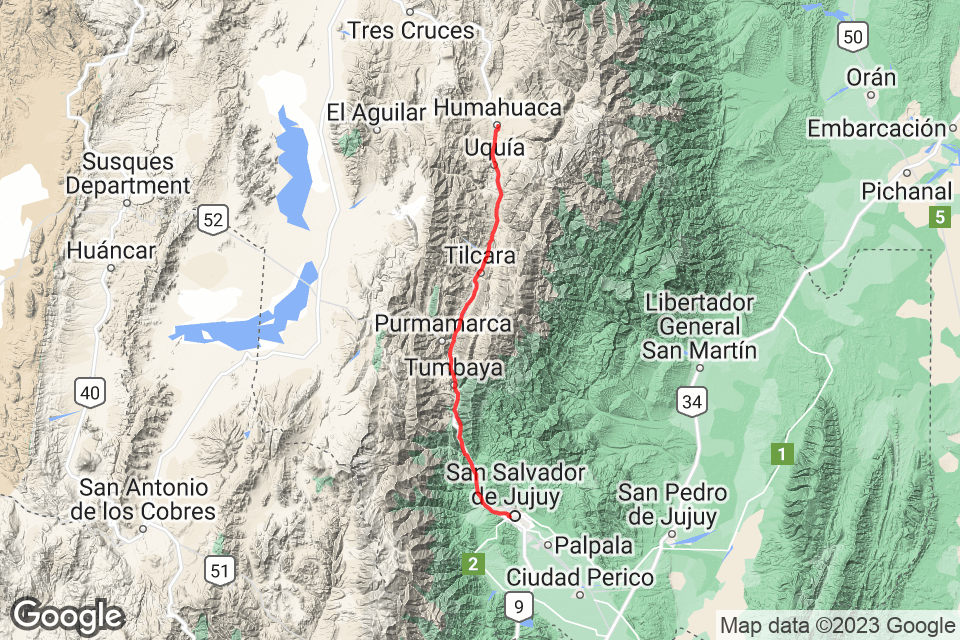 Saturday I had the biggest part of the descent, going from 3000 to 1300 meters in a 120 km ride to San Salvador de Jujuy. Things started fairly easy on a nice downhill, crossing the Tropic of Capricorn after 28 kilometers, so I guess I’m really in the Southern Hemisphere now.

The middle part was a bit harder with some short but steep climbs and no large downhill sections. A headwind started here, making things harder. At 90 km there was a last bigger climb before the serious downhill started again. However, I took a flat gravel road around this to avoid the climb.

As I closed in on the city the two-lane highway turned into a proper motorway with no real alternative for cyclists. Luckily the road had a good hard shoulder that was not too dirty, so I rode on that until a parallel city road started and I had an easy ride to my hostel.

I found San Salvador de Jujuy not terribly interesting, there are mainly lots of shops. The main square is nice, with a cathedral and some interesting government buildings. There was some kind of procession starting from the cathedral on this Saturday afternoon.

For dinner I went to a parrilla place, where you can get Argentinian barbecue-style meat. I went for the full parrilla experience, where you get served all kinds of different meat cuts in several rounds. It sure was a lot of meat.

From here, I plan to ride to San Miguel de Tucumán in 4 days, about 330 km. That means on Sunday I want to ride 80+ kilometers, ending up in a large gap between villages where I will have to camp out somewhere, before continuing to Metán at the half way point on Monday.