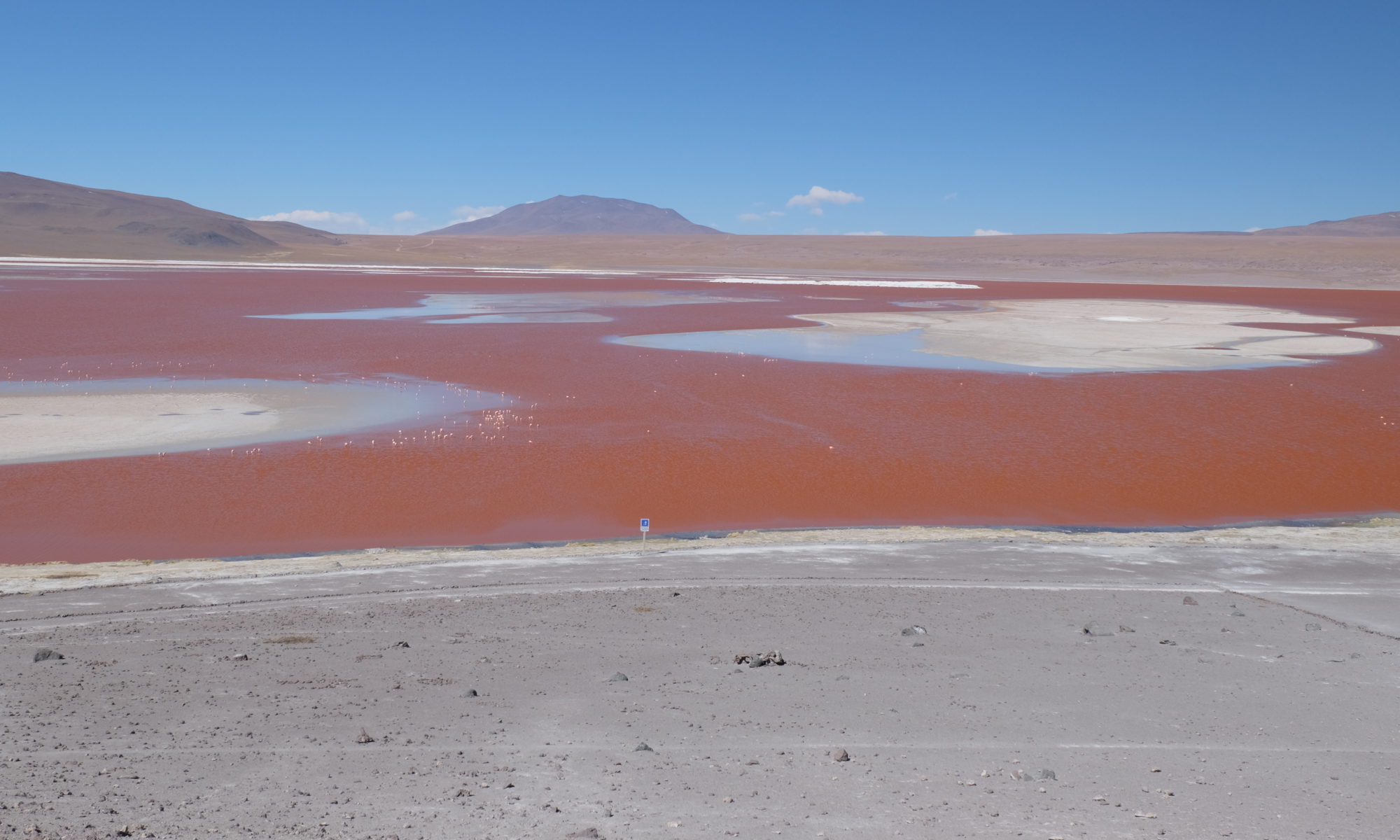 I’ve been in Uyuni all Saturday to get some rest, book a three day tour in a jeep and to plan the alternate route that I’ll ride afterwards. At least there is different food around here, lots of pizza places and Mexican food. I also had a nice llama steak, but properly frying fries is still asking too much.

On Sunday morning I leave on a three day tour of the Salar de Uyuni and the Sud Lipez. I’d have liked to do this part by bike, but as detailed before, that’s not working out for me.

The post title describes how Uyuni feels. At all times of day a large number of 4WD vehicles is parked and moving in the main street. A lot of them are (Toyota or Lexus) Land Cruisers and there are also some Nissan Patrols, Mitsubishi Pajeros and Toyota Hiluxes. However, once you get out of town and on the tourist trail, you see 99% Land Cruisers of the J80 and J100 generations (1990-2007), as if the Guild of Land Cruiser Owners is having their annual meeting, but this is happening every day. There are literally hundreds of these doing multi-day tours of the region (south-)west of Uyuni.

On Sunday morning at 10:20 I reported at the office of the touring agency. Together with 4 others I was assigned to a car, a white 7 seater Land Cruiser J100 series, and its driver Javier. We all had plenty of room to sit. After loading all the luggage on the roof, we left for the first goal of the day.

This day was extremely windy, so we arrived at the train cemetery in a sandstorm. This is a place where old trains were dumped to rust away and tourists now go there to look at them. The large amount of dust in the air here added to the apocalyptic look of the place.

Next it was time to enter the salt lake in earnest. First we went to the salt hotel. As the name suggests, this hotel is mostly built from salt, so it was pretty interesting to see. Nearby were also a few monuments commemorating the two times the Dakar rally visited Bolivia in 2014 and 2016. People here seem to be pretty proud of this, as stickers and wall paintings about these events are everywhere. At the salt hotel we had a pretty good lunch where I even drank Coke. It was Coke or water, and it seemed like a good idea to get something other then water for a change.

Next up was Isla Incahuasi, an island in the middle of the salar which is full of large cactuses. Before we entered the island, we stopped at the edge of the salt to take some crazy perspective photos. The salar is really suitable for this, since the landscape is completely flat and featureless if you look away from the island. Then we had some time to walk a lap of the island and admire the cactuses.

After that we started driving to our hostel in San Juan, but before we left the salar we stopped to appreciate the sunset. Then the hostel turned out to be a salt hostel as well, with walls built partially from salt and loose salt on the floor. There we got dinner consisting of soup and Pique a lo Macho, a dish of fries, onions, meat and some other vegetables. Then it was time to go to bed early.

On Monday the goal was to visit the Sud Lipez region with its high altitude lagoons and other interesting sights. The day started nice and quiet, and most importantly without wind. We spent a lot of time driving, but that was okay, because it was all interesting off road driving. Sometimes when we were driving across a large field full of crisscrossing tracks it would feel like we were participating in the Dakar rally.

There are a number of interesting lagoons here, which all had something different. The first are Lagunas Cañapa, Hedionda and Honda. These are nice lakes surrounded by mountains and they had lots of flamingoes in them.

Then we stopped in a small canyon with meltwater runoff flowing downhill along the bottom. Here we had a nice lunch with pasta, vegetables, potatoes and chicken, all prepared by Javier.

Exiting this canyon, we had a look at the spine of the Andes, forming the continental divide and also the border with Chile. Unfortunately this was also where it got windy again.

Next stop: Some interesting stone formations, including the famous Stone Tree.

And then we entered the national park that contains the highlight of this tour: Laguna Colorada. Depending on the time of day and year, this lagoon can have several different colours due to algae growing in it. When we got there it was a bright rusty orange-red colour. There was also a large number of flamingoes in the lake, as this is their breeding ground.

Then we went to the geysers in the National Park. These are not geysers like those in Iceland or Yosemite NP that periodically shoot water into the air. Instead, there were several muddy pools from which steam and other compounds bubbled up, including sulphur dioxide, so you can imagine the smell.

That night, we stayed at a refugio near Thermas del Polque with a nice view over a mountain lake. Those who wanted could visit and sit in the thermal pools after dark. However, we were very high up (about 4444 meters) and I was a bit dizzy, so I didn’t go. At these altitudes it gets very cold after dark, both outside and inside the hostel. Room heating and insulation are things the Bolivians haven’t heard of. Instead they just wear coats inside and sleep under several layers of thick blankets.

The final morning we visited the last lakes, Lagunas Verde y Blanco, before dropping off the rest of the group at the Chilean border, as they would be continuing to San Pedro de Atacama.

And then it was just Javier and me. We had a 7 hour ride ahead to get back to Uyuni with just a few stops. Thus we were playing Dakar Driver™ all morning before returning to Uyuni at around 16:00.

In hindsight I think I made the right choice not to ride this route. Although the road generally looked at least ridable, the high altitude and steep climbs would still render them unridable for me. Javier had the following to say about the people riding there: “Todos estan muy locos” and I sort of agree with him. You have to be at least a little crazy to go cycling here. I am however not crazy enough in the right way to do it. Big props to the people who were actually cycling this route, including the recumbent rider we saw.

Back in Uyuni, I stayed until Wednesday. I arranged a bus ride to Villazon in the evening and thus hung around Uyuni all day. I walked around town for a bit and sat in the touristy square until it was time to leave. From Villazon I’ll cross the border to La Quiaca in Argentina where I will restart the bike tour after more than a week away from the bike.

One Reply to “The Land Cruiser Owners’ Guild”