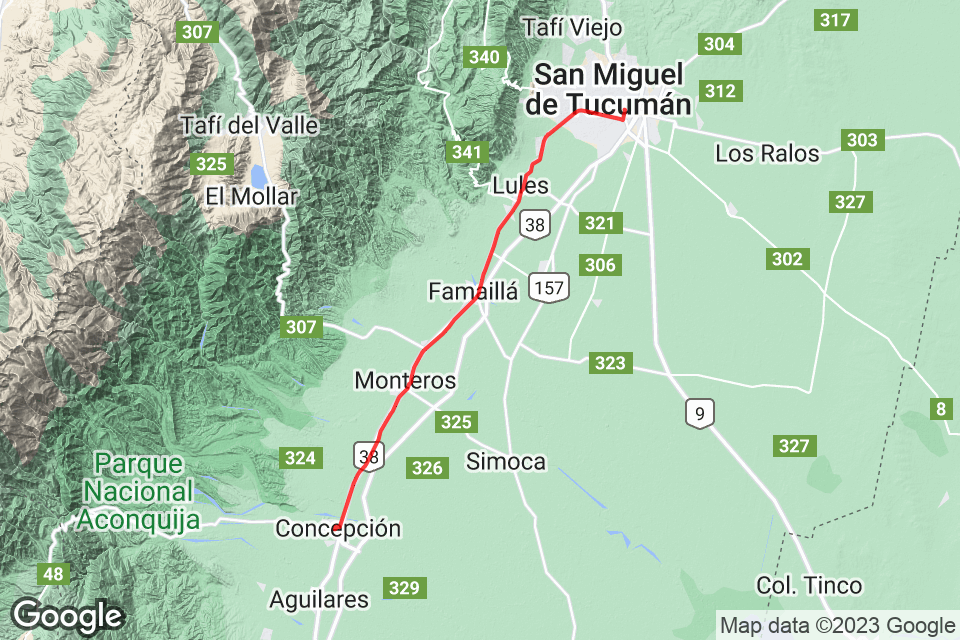 Friday started at 10 after a very meager breakfast at the hostel, which is normal here. A cup of tea, a glass of carbonated water and a few small pieces of bread is usually all you get.

It took about 20 km to get out of town with much stop and go at traffic lights. The Ruta Provincial was initially quite busy, later less so. The ride is easy so far. It was still cloudy in the morning, but the sun came out a bit in the afternoon. The predictions say that the coming days will be very hot.

As I stopped to take a few photos, a family got out of their car to talk with me. They asked where I’m from and I answered Holanda. One of the women replied “es el país de la reina Máxima”. Thanks Einstein, I guess. They also wanted to take pictures with me.

I stopped about halfway in Famailla, a nice town with many historical monuments. The Independence War is very much alive in this region. Much of it took place here 200 years ago. I had empanadas again for lunch.

The afternoon was more of the same, an easy ride into the town of Concepción, where I attracted more looks than usual. People on the road often honk, wave or give a thumbs-up when they see me, and people on the side of the road also often respond in similar ways. Minus the honking, of course. Instead they will just say hi or yell at their friends to look.

I walked into the first hotel I saw and asked for a room, but it was a bit expensive, so I asked if there were cheaper hotels in town. The guy pointed me to another hotel, which was indeed cheaper. By fully 10 Pesos. Thank you mister, you saved me €0,50 ! In the evening I finally had a good bife de chorizo. The one I had before was way overcooked.

Tomorrow I’ll be approaching a hill with about 800 meters of elevation difference. At the end of the day I plan to climb part of that already, so I can finish it off early on Sunday and descend to the city of San Fernando del Valle de Catamarca. Yes, I don’t make up these names. 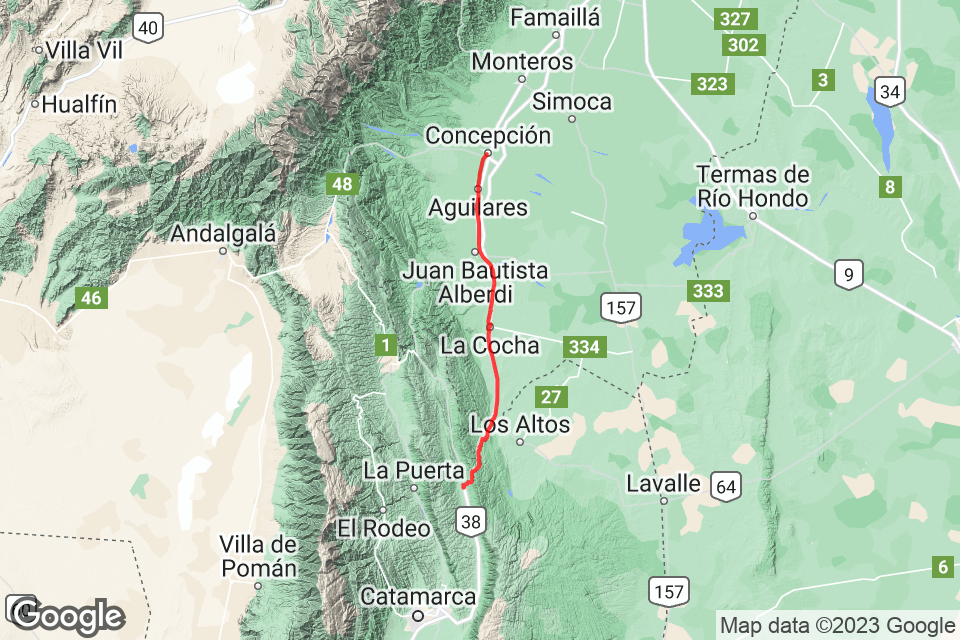 Saturday it was indeed sunny and though it was “only” 26 degrees it was already quite warm. The coming days will be warmer than that, so I should start early and finish before it gets really hot.

Initially the cycling was more of the same: easy and on good roads. There were more dogs than usual, though I know how to deal with them by now: Most dogs act really bold, but in reality are cowards, so drive close by them if you can and most of them get scared and give up. If they start following you, stop and yell at them and they usually go away.

I also got stopped by some people again who were interested in my bike, and this time one of them actually told me something I didn’t know yet: Holanda no es mundial. Oh no, we’re not going to the World Cup! </care>

The road passed by a series of towns again, most of which have a nice road leaving the highway a few kilometers before to take you into town and another taking you back to the highway. Today I even passed through a town that has, I kid you not, a separate bike path! After some 50 km I wanted to head into La Cocha and there was such a road again. This one, however, was not nice. It was very sandy and hard to ride on.

I took the the daily special at a small shop/restaurant and it was very good, some chicken with noodles. There must have been done kind of doping in it, since the amount of progress I made in the afternoon was almost scary. I was doing way over 20 km/h on my loaded bike on a slight uphill. In all fairness there was a bit of a tailwind to help me along.

Even the start of the real climb went well and soon I was in La Viña, the last village before the pass. This is where I planned to stay for the night, but apparently the inn that was indicated on my map had closed. I made sure to update OpenStreetMap at the first possible occasion so others don’t fall into the same trap. I’m also adding places I stay or eat at that are not on the map yet.

The locals suggested some other options, but they were all quite far off route. Thus, they concluded my best bet would be La Merced. Only one problem: There was this pesky climb in the way. It was now 16:30 and I still had a little over 500 meters of elevation to go.

So it was either do the climb or camp out here. Sunset is at about 19:30 here. During my break in La Viña I drank a bottle of Fanta and had some snacks, so my energy levels were up and I decided to go for it.

In hindsight this might be the best time of day to climb this hill, since the sun was low in the sky and I was in its shadow for most of the climb. An hour and a half later I reached the top. There I found what at first looked like a pile of trash, but was actually a shrine to Difunta Correa, a lady believed to have died of thirst in the desert. Thus, people leave bottles of water at roadside altars to her and this one had a particularly large pile of them. I only realised this later, so I didn’t take a picture of it. Update: Pictures at the end of the next post.

I quickly descended to La Merced, where I had to try two hostels to find a room, but for the first time in days it’s one that doesn’t use my full daily budget or more. Obviously this saves me quite a lot of effort tomorrow and it’s just a short ride to Catamarca now. 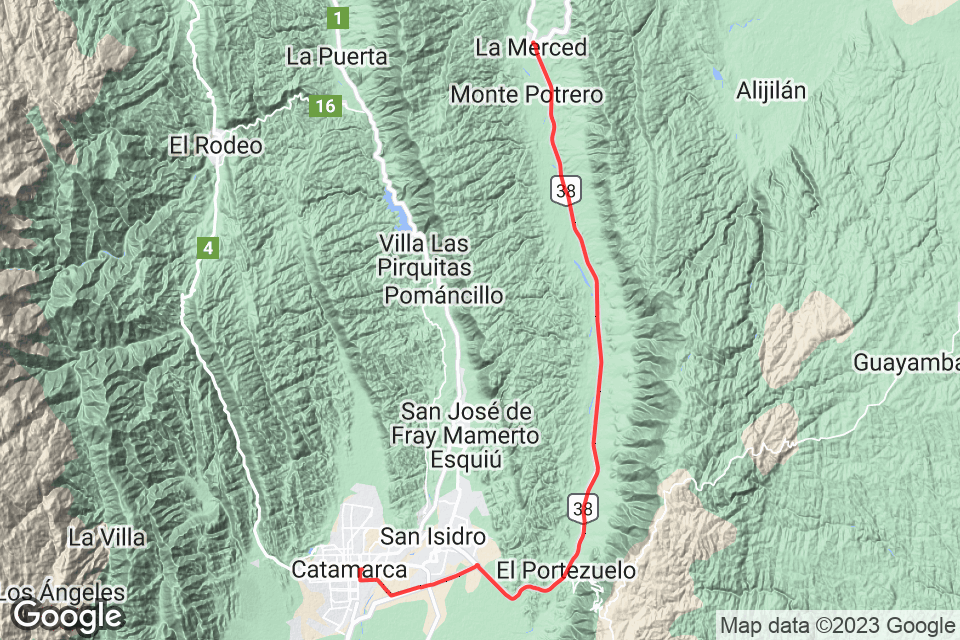 The ride on Sunday was indeed quite short, I kept a good speed on the descent and didn’t stop for anything until I reached the city at noon, not even to take some photos. Thus I have half a rest day here.

It did get very hot during the afternoon, so I stayed in the shadows as much as possible. I understand now that the siesta is really necessary in this region, where temperatures can reach 50 degrees in summer. Celsius, of course. All shops close in the early afternoon and reopen in the evening. For the same reason the Argentinians have dinner really late, at 21:30-22:00, and city squares are not open spaces, but instead are parks with many trees to provide shade.

In addition to the usual afternoon closure, I had kind of forgotten that today is Sunday, so many shops were closed all day. I should remember to not plan rest days on Sunday if possible.

At dinner time I even remembered to order a salad with my pasta. Out here you have to make sure to eat enough vegetables, as they are often not part of the standard restaurant dishes. 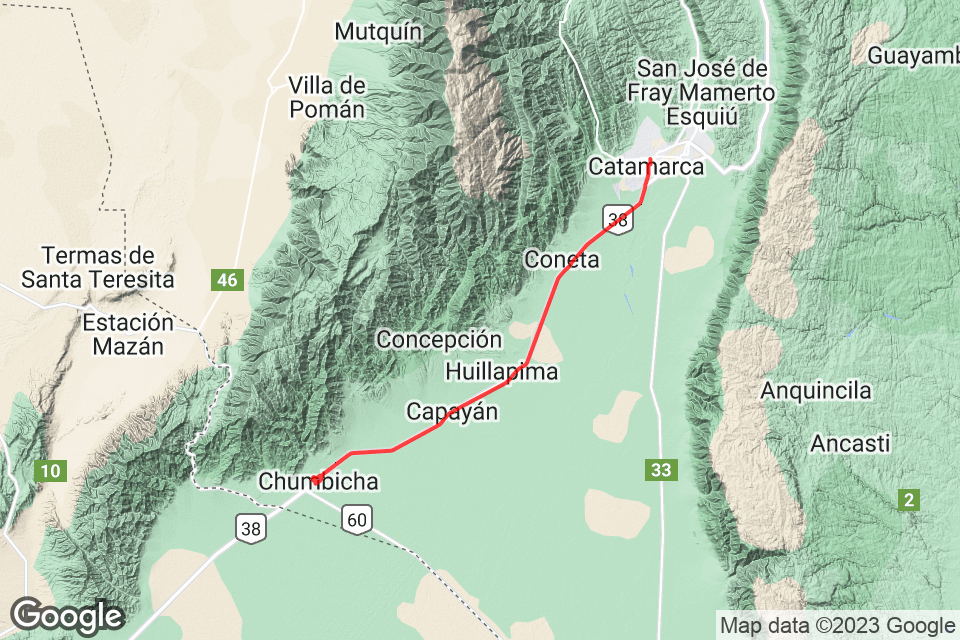 On Monday I left at 8:30 to avoid the worst heat. It was now 155 km to La Rioja, so 2 days. The climate on this side of the mountains I crossed two days before is a bit dryer than on the other side, so there are mostly small trees and some cactuses on the side of the road. On my right is another mountain range, which I will cross farther south where it gets lower. There are also many large olive groves and some factories to process the olives into olive oil.

At 65 km is the village of Chumbicha, after which there is a big gap with nothing, so I planned to stop there. I reached Chumbicha at noon, but there was very little in the city, even getting lunch turned out to be a problem.

I sat down in front of a closed restaurant next to a fuel station to consider my options. Since there was nothing here, I decided to move on and wild camp somewhere along the road. Just as I was about to leave, the restaurant opened and I had lunch. By the time I was finished it was 14:30 and extremely hot. During lunch I saw that the people of the restaurant also rented out rooms, so I took one of those and stayed there for the night.

In the evening I walked through town again. It’s quite sad to see all the former glory that left together with the railroad. Now it is just a sleepy little town with very little economic activity. It makes you wonder how all the people here survive, since there doesn’t seem to be much work out here. This is of course the story of many of the small towns on this route. However, the town was still very much alive, there were many people on the street playing sports, listening to music and other things. I had a pretty good pizza at the town’s only restaurant, which was also closed at lunch time. 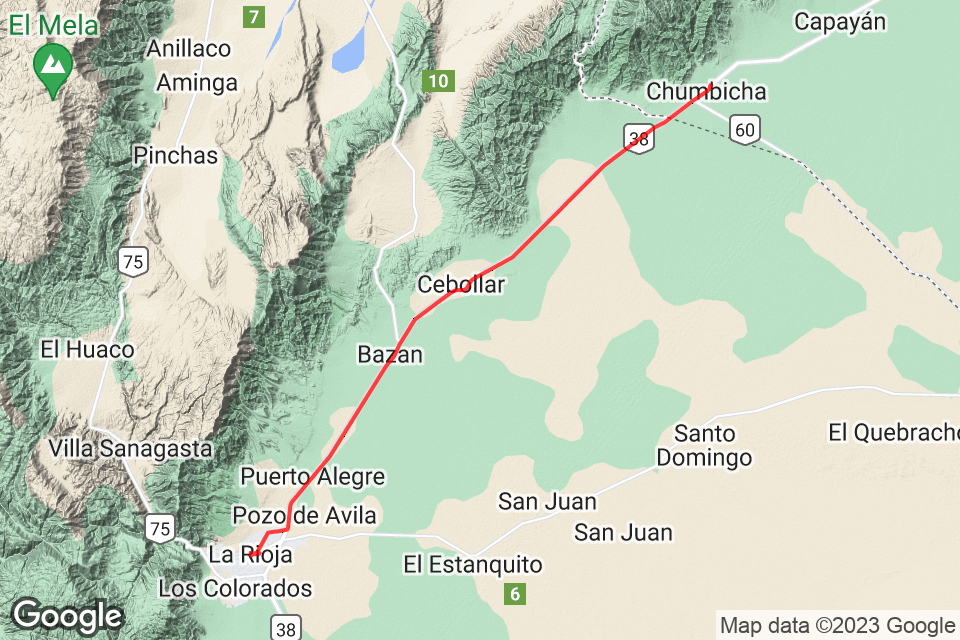 On Tuesday I had about 90 km to go and the predicted maximum temperature was 36 degrees, so I left at 7. I hadn’t paid for the room yet and no one of the family renting out the rooms was up, so I just left the money in the room.

At this time the sun was just rising and much of the road was still shaded by the trees on its left. As the sun rose it quickly got warmer. The landscape is still the same. I made good speed and kept a very consistent average of 20 km/h, arriving in La Rioja at 11:30.

By this time it was already quite warm and I just drank the last of my water, so the first order of business was ice cream. There is large a chain of ice cream stores in Argentina called Grido Helado, which is present in every larger city. This was my first encounter with them and it was pretty good.

I’m taking a rest day tomorrow, which in a happy coincidence will be the hottest day of the week, and then I’ll start the second half of the ride to Mendoza.