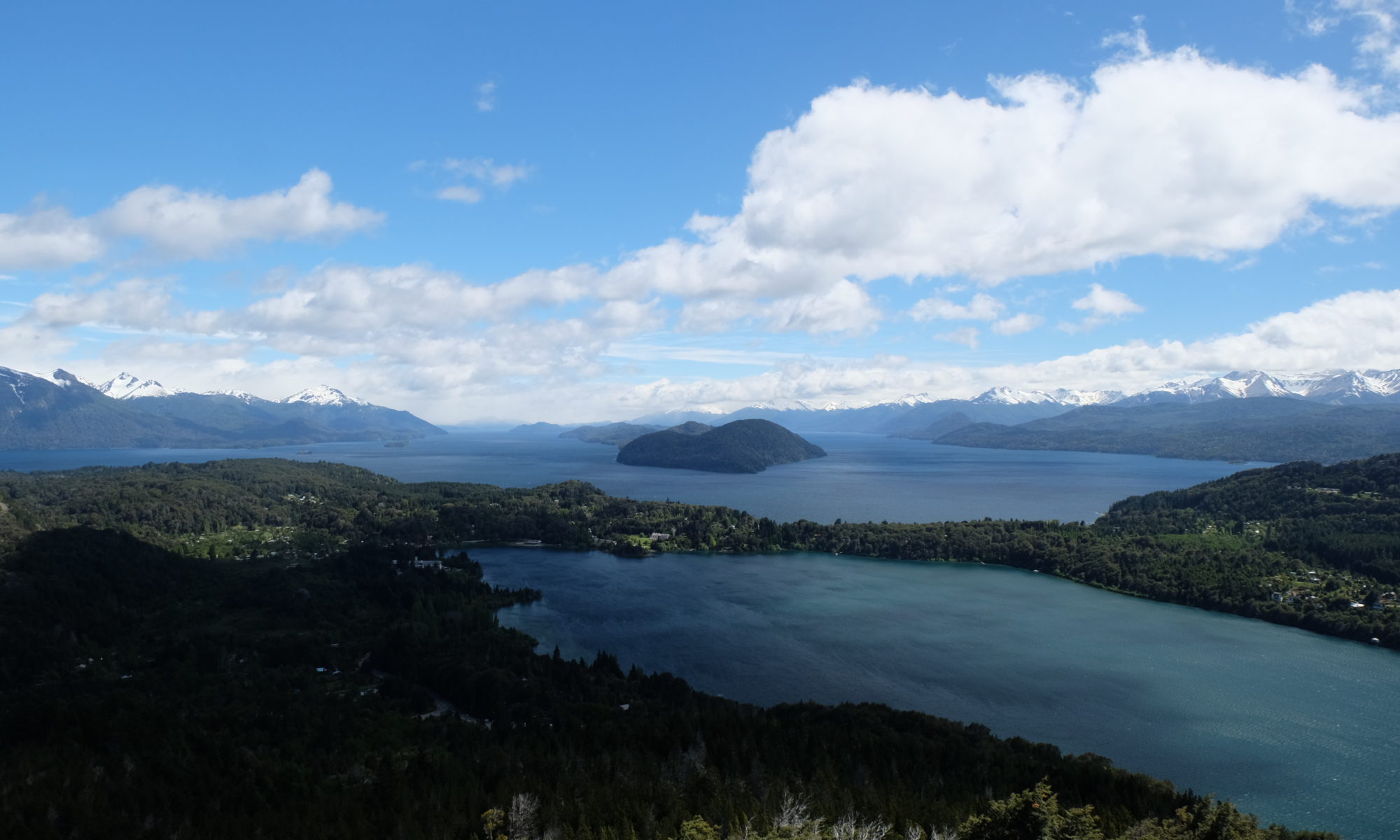 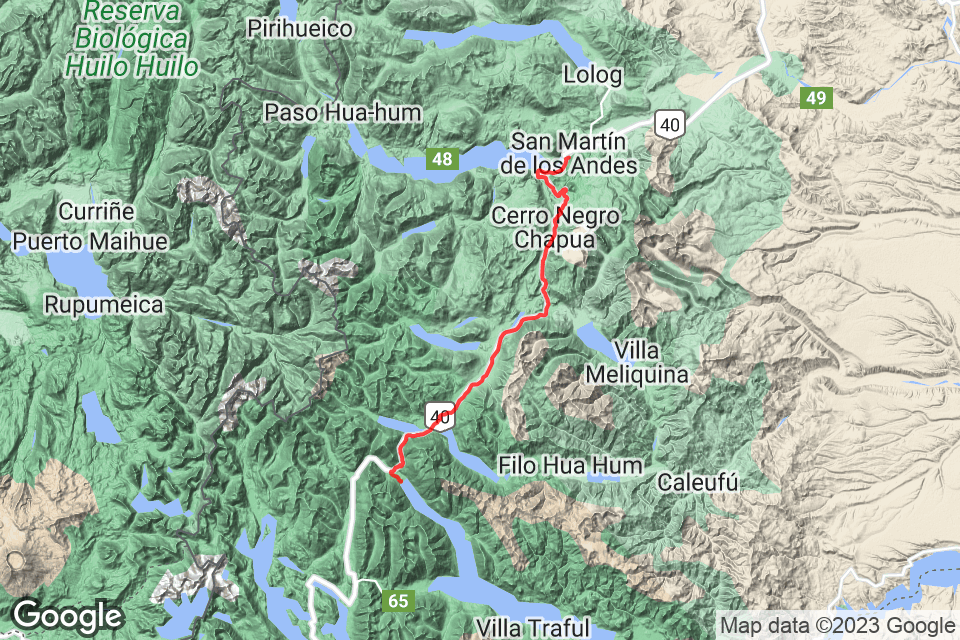 Tuesday’s ride went along the lake for a few kilometers before starting a big climb toward the next lake. I went slowly, not because the climb was so hard, but because I had to stop often to take pictures.

I also stopped at a popular viewpoint and several people wanted to talk to me. As soon as the name Villa la Angostura is mentioned everyone is quick to tell me that queen Máxima’s brother lives there and that the Dutch royal family likes to visit whenever they are in Argentina. They also say it’s very beautiful there. Even a few weeks back when I was on the ripio section to Barrancas I talked to some folks who said the same.

At the top is an interesting curiosity. A little stream flows down the mountain and crosses under the road. According to the sign here the stream will soon split, with one branch eventually flowing to the Pacific Ocean and the other to the Atlantic. That’s how little the continental divide means down here. There are many small and not so small streams here, so my water problems are solved for now. On my descent the river quickly got bigger and it was a constant roar to my right.

There are many campgrounds on the climb and on the other side are many places offering cabañas and apartments. I stopped at a restaurant for a hamburger and salad lunch. After that the ride continued with views of several more lakes and other nice sights in between.

Today’s ride isn’t long, but it’s also not easy in theory. I don’t think there’s one flat meter on the whole route. I took my time with many stops and so I needed from 9:30 until 16:00 to ride the 60 kilometers, but it wasn’t very tiring this way. Tomorrow’s route is even a bit shorter, but with a similar profile. So another easy day I suppose.

I stopped at a campsite on the northwestern shore of Lago Traful. It’s a very beautiful spot and there are showers. Every site has a table and a firepit. The camping has a restaurant, but it’s not open this early in the season. There’s a designated free campsite on the other side of the road, but that isn’t on the lake and has no facilities. I set up next to two guys from Buenos Aires who are riding their rented mountain bikes with big trailers to Bariloche.

I walked around the campsite, which also has great views of the river and some shallow pools with all kinds of animals in them. Some birds looked like they got angry at me. They kept flying close by and were very loud. Despite this I didn’t get a good photo of them. There should be a great short hike to a waterfall on the other side of the river, but it looks impossible to cross at the moment and the bridge is 2 kilometers away, making the hike a lot less short. It started to rain a bit during my walkabout, but nothing serious.

During the evening the rain got a little worse and it cooled down significantly. The man at the reception had offered me to cook in the restaurant kitchen and even sleep inside if I wanted to. At that time the weather was still good, so I set up my tent at the lake. Now with the rain and the cold being inside sounded good, but the building was closed and the staff had left. I cooked under a little roof in the back and just as I finished eating the other cyclists joined me. Many people were hanging out at the lake during the day, but by now the three of us were the only people on the campground. Since we sort of had permission we “broke into” the building. One of the barred doors could easily be opened from the outside. We fired up the wood-burning stove to get warm and shared a bottle of wine the others had brought. 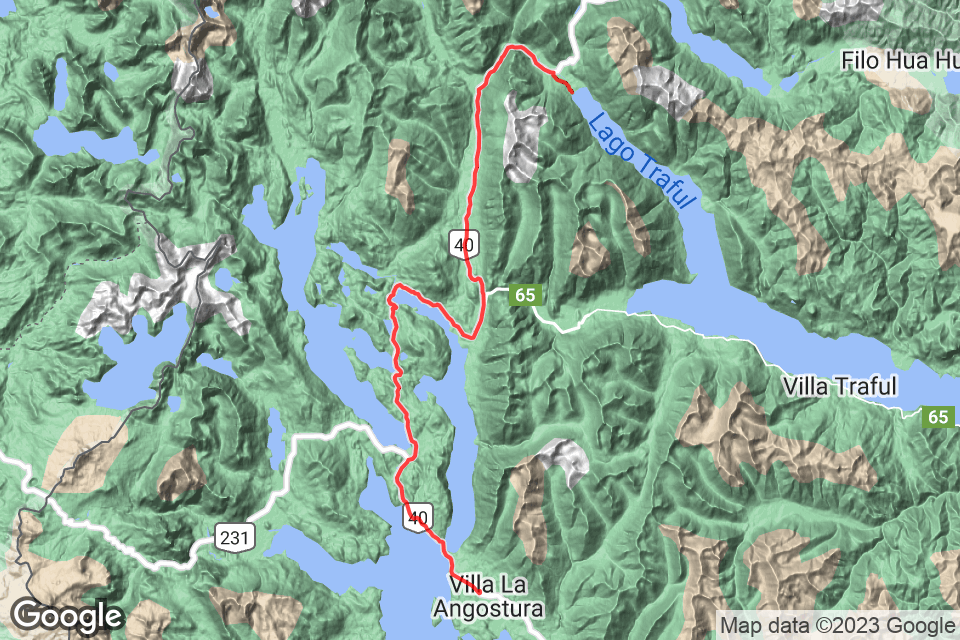 Wednesday was cold and miserable, but I guess I should get used to that as I head further south. It was raining on and off all morning and so I packed my tent wet. The ride was even shorter than yesterday’s and there were no large hills to climb, but there were some ridiculously steep sections and it was again hilly all day. In the morning I could clearly see that some of the higher altitude forests were frosted after the cold night.

I met several people riding the the other way. First two Americans who are also heading to Ushuaia. Wait what? They got tired of the desert, took a bus from Mendoza to Bariloche and are now riding the lake district northwards because they have some extra time on their hands. Then they’ll cross to Chile and ride south again there.

I also met several “locals” who go on an approximately 5-day vacation to cycle the lake district, just like the guys on the camping yesterday. Interestingly the people on these shorter tours appear to be carrying the most stuff. I guess they haven’t yet learned the art of bringing only what you need. On the hardest climb of the day I met a guy who told me the rest of the ride would just be downhill. Great, thanks. Except it wasn’t, though the following climbs were certainly easier to conquer. That’s why I called this one the hardest of the day, if you catch my drift.

I went a bit faster than yesterday, since I didn’t take as many photos. I also liked the landscape a bit less, but that might just be the weather. Anyway, I got to Villa la Angostura at about lunchtime. The town centers very much around Ruta 40 with the same alpine-style buildings as in San Martín. I don’t get what all the hype was about, it’s not very scenic out here. Maybe the waterfront is where it’s at, but that’s rather far outside town. Or people are talking about the surrounding area, about which I agree. 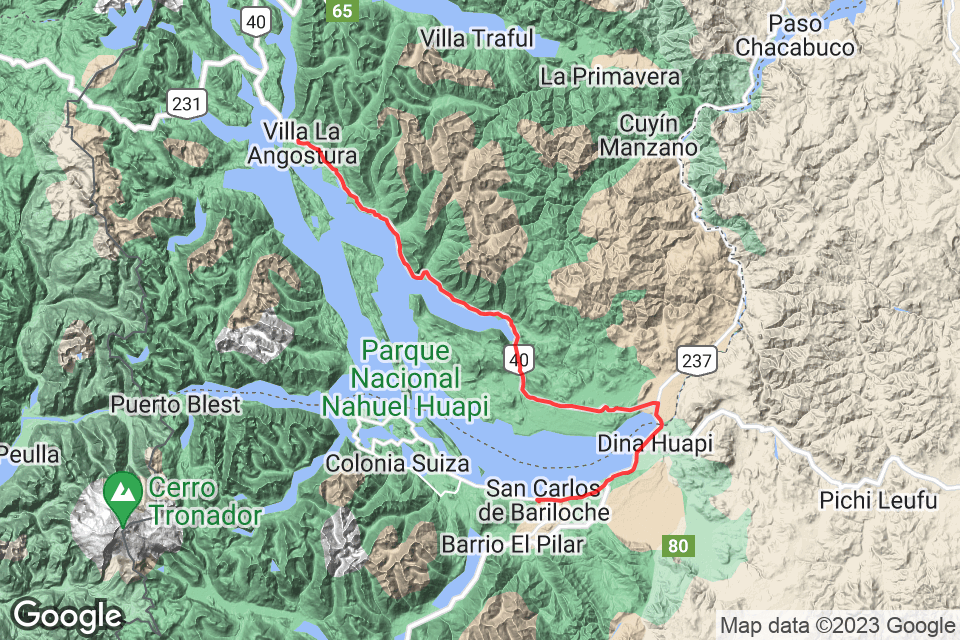 This morning it was raining a bit more than Wednesday. I was dragging my feet about going outside, but I had to leave at some point. I was in full rain gear and it was actually not that bad. The ride is longer than the last two days, but also has less climbing, since it mostly follows the shore of Lago Nahuel Huapi.

I didn’t see any other cyclists all day. Maybe everyone wisely stayed inside today. There was much traffic and the road wasn’t ideal for overtaking, but many drivers couldn’t summon a little patience until they could do so safely. Hint: Check what the double yellow centerline means. A special mention goes to the idiot who overtook two trucks in an outside curve he couldn’t oversee and thus got in my lane. Please go to the police station and return your driver’s license.

At noon the weather changed. The rain got less, there was some blue sky and I got a little taste of the infamous Patagonian winds. Initially it was in my back, but I had to go around the lake and turn west at the end of the day. The worst part wasn’t the headwind, but the short bit where the wind was blowing from my right. It’s really hard to cycle straight in these conditions.

San Carlos de Bariloche is a big town on the shore of the lake, but also on the flank of a hill. Thus the streets going away from the lake are extremely steep, but this also means many places that aren’t directly on the lakeside still get a nice view. Lots of buildings are clearly optimised to provide views to as many people as possible, for instance with terraced construction.

That evening I had a good burger at Manusch brew pub and after a few more pints I returned to my hostel. Some people were hanging out in the common room, so I joined them and played a game of pool, which I was winning until I pocketed the 8-ball in the wrong pocket. Then someone suggested to go to the late happy hour at Manusch and thus I ended up there for the second time this night. It got a bit late, but tomorrow is a rest day anyway.

The next morning I headed to Cerro Campanario, a nearby hill with a fantastic view over the lakes in the region. Many people claim that National Geographic calls it one of the top ten views in the world, but I can’t find a source for that. It’s probably one of those urban legends that everyone reads somewhere and then copies into their own story without checking. I could have taken the chair lift, but I decided to walk up. It isn’t far, but it’s steep and tricky. The 360° view from the top was well worth it, regardless of what NatGeo does or doesn’t say.

After lunch I went to my room with the plan of writing the blog and planning the next few weeks in more detail, but instead I ended up sleeping for a while. After that I visited the Patagonia museum at the central square and did some shopping, including the chocolate that Bariloche is famous for.

That night I went to a highly rated steakhouse for dinner. It’s not cheap, but the rib-eye steak was easily the best meat I had so far. I got two pieces, each of which would have made a respectable steak by itself. With my cyclist’s appetite I had of course no problem eating all of it and my stomach still didn’t feel full. The grilled vegetables and wine were great too. I didn’t recognise the name on the wine list, but my wine was from Bodega Vistalba, one of the wineries I visited back in Mendoza. As I was at the cash register to pay with my credit card I could see into the kitchen with an impressively large grill and an equally impressive pile of meat waiting to be grilled.

Up next are the last few days in Argentina for now, as I will cross to Futaleufú in Chile before my next rest days. The plan is to return in about a month and much farther south.