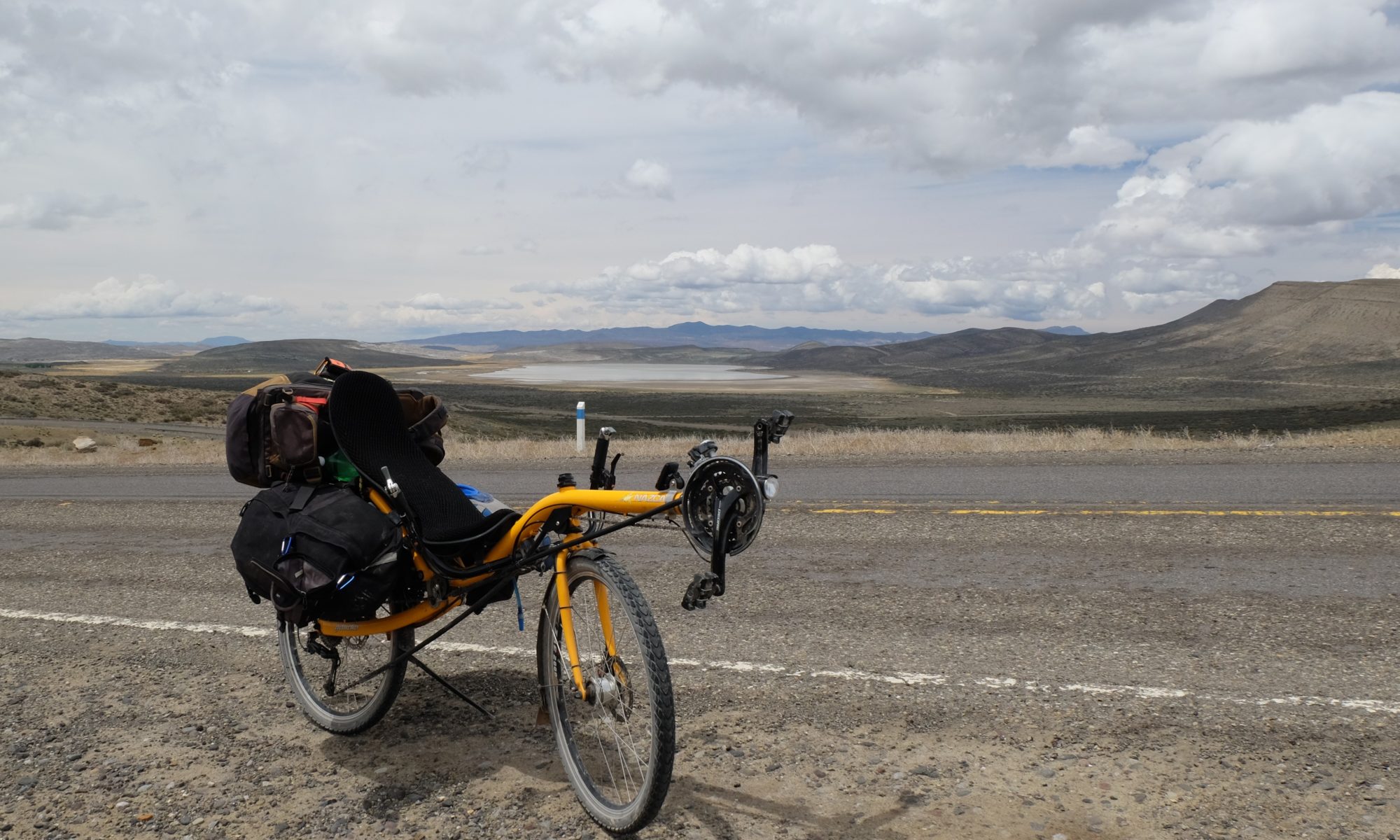 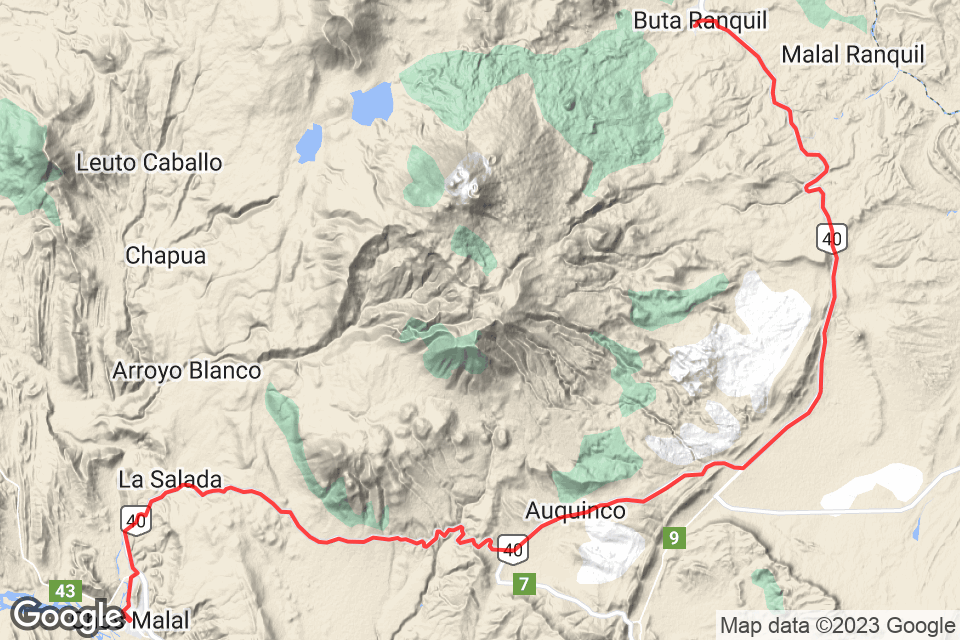 The next climb was fine, as they had already told me, but it was a big one and so I needed a while to get up. From the top it was mostly down, but there were still some hard parts until about 12 km before Chos Malal. Then it was an easy descent into town. During this descent my lower jaw had a hard time fighting gravity, as there was something new and awesome to be seen after every bend. It’s a good thing my helmet has a chin strap I guess.

Ever since I left Malargüe the villages I stayed at have gotten progressively bigger and this is the first real town since then. I desperately need cash, but every time I walk by one of the banks there is a ridiculously long line. I checked after dinner at 22:30 and the line was still there. Even the next morning at 8:30 some people were waiting, but this time I got in line. And then just before it was my turn it ran out of money. Seriously, just add one if it’s this popular. So now I’m leaving town with very little cash. Oh well, there’s not really anywhere to spend it before the next town anyway. When I passed the bank on my way out of town I guess it was refilled and the long line was back again. 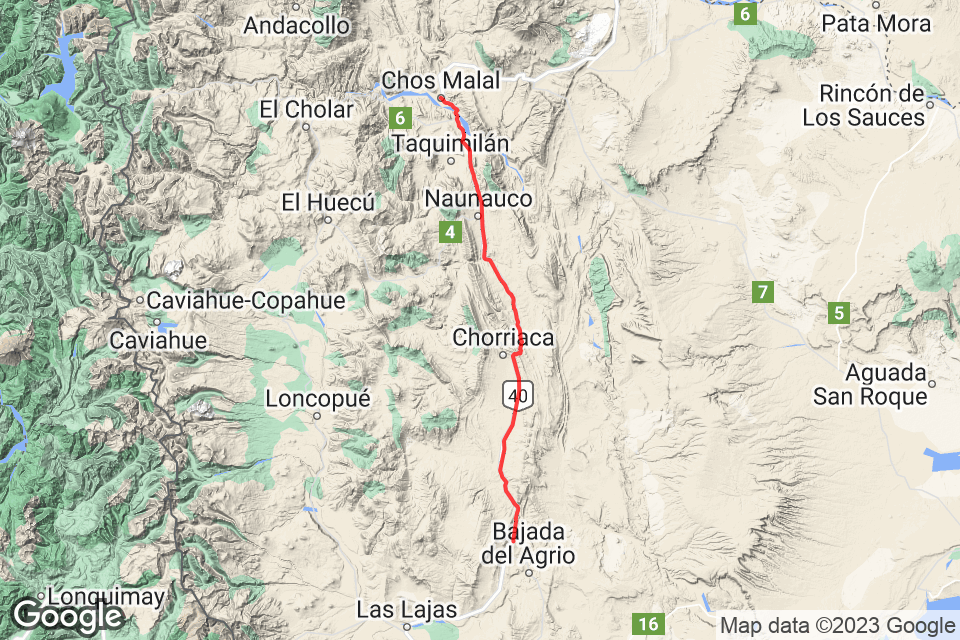 There’s a big gap to Zapala, which is about 215 km from Chos Malal. At 155 km there’s the village of Las Lajas, but that’s a bit much for one day. I somehow totally missed the existence of Chorriaca about halfway to Las Lajas, so if you’re willing to spend 3 days on this section you can at least sleep near civilisation every night, though there are few services.

I want to do it in 2 days, meaning I would have to camp somewhere in the middle. I recently learned about the iOverlander app from other bike tourers’ blogs. In this app users can mark good wild camping sites, among other things, for others to see. It shows that there’s a great campsite 120 km from Chos Malal, so that’s what I’m aiming for.

I left town on an easy road running next to the river. The weather was completely different from yesterday’s, with a totally blue sky.

Soon there was a police check and just 200 meters past that was the monument marking the official midpoint of Ruta 40. Interestingly this is also close to the midpoint of my tour as a whole and of my first section on Ruta 40. Yesterday I passed km 2652, meaning I followed Ruta 40 for 1000 kilometers of its length. I’ll leave it behind in a few weeks when I cross to Chile, but I will return briefly in the deep south.

Then the bridge across the river was blocked by a herd of goats and a few horses being herded toward me by a gaucho.

There are a few hills today, which are not as big as yesterday, but still worth taking seriously. I was still tired from the previous ride, so they didn’t come easily. To make things worse my rear derailleur was giving me trouble. It’s clearly not set up correctly anymore, but so far I can’t get it right. So I think I’ll have to find someone to fix it in Zapala.

Otherwise things went well and after a smaller climb at the end I easily found the site I was looking for. I’m hidden from all sides, even mostly from the short dirt road I took to get here, but the view from just outside my tent is fantastic. It is getting a bit windy in the evening.

I watched the stars for a bit tonight and also took some photos, which went better than last time. It’s interesting that there’s still light coming over the horizon from all directions. The sun and moon are far below and except for a village in the valley to the southeast there’s nothing for tens of kilometers or more, so I don’t know where it’s coming from.

I slept well that night, which is unusual for me when camping. This is probably an indication of how tired I was. I even got up a bit later, at 7:00. 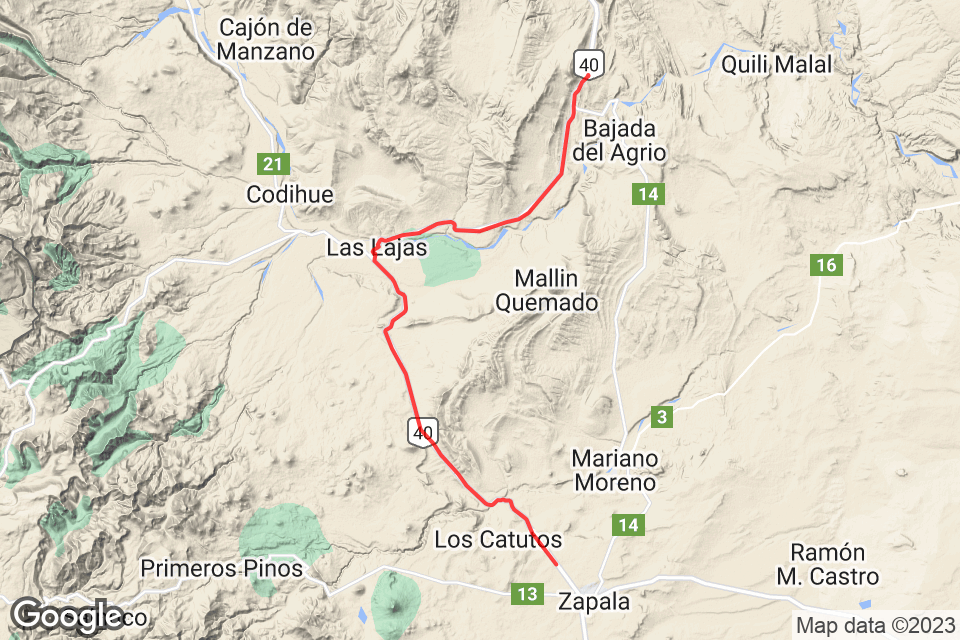 Had to stop 6 km outside Zapala because of technical issues.

The ride started well and I was glad to get the westbound part to Las Lajas done early before the wind started blowing. I got some medialunas, a sort of croissant, and fresh drinks before continuing.

The second part had some climbs, but now the wind was more or less at my back and so things didn’t go too badly. I was looking forward to arriving in Zapala at about 15:00 and taking a rest day there.

Until my derailleur completely crashed 6 km outside Zapala. It got caught in the spokes and wrapped around the cassette. Nothing could move in the back until I managed to remove the derailleur. The derailleur hanger is also severely bent, so I don’t know how this will continue. I tried for the better part of an hour to get a lift for the remaining ride into town. At some point I loaded my bags back onto the bike and started walking.

Update: I suspect that the derailleur got bent a few days back on the big ripio section. It was already not shifting properly for some days and I was planning to find a bike shop in Zapala anyway to check it out.

Soon after that a Hilux going the other way stopped and turned around. The driver is a cyclist himself, who also likes riding his motorbike all across Argentina. He gave me a lift into town, where we saw 4 men on racing bikes. He asked them for a good bike shop and one of the riders turned out to own one. Their bikes were set up with high end Shimano gear, so that looks promising. Many bike shops around here only have cheap local brands. Let’s hope he can fix it and get me going again.

I’m looking forward to the next part and the man who have me a lift confirmed that it is exceptionally beautiful. All the more reason to get back on the road.

First problem: getting the bent derailleur hanger straight again. After some work with hammers, pliers and wrenches, the mechanic was satisfied with the result. He even started trying to fix my bent derailleur, though he eventually had to give up on that. From the extremely messy back of the store he produced 4 different 9-speed derailleurs, the best of which was a Shimano Alivio, so we went with that. A slight downgrade from my Deore, but whatever. If it lasts the rest of the tour I’m happy. It’s also a lot more expensive than in Europe, like many imported goods. After an hour and a half the bike was ready to go again. So excellent service by Ciclismo Dinamarca, Av. 12 de Julio 216 in Zapala.

I’ve now been riding for 7 days since leaving Malargüe and most of them were very tough, so I had already planned a rest day in Zapala. Finding a place to stay turned out to be hard again. There aren’t that many hotels in town, and all of them were either full or ridiculously expensive. In the end I had no choice but to go with one of the expensive ones. And it’s a pretty shitty room, even if it were half the price.

Another thing that’s almost complete, but not quite, is my trek through the desert. Just two more long days remain to Junin de Los Andes, which marks the start of a whole new environment.

4 Replies to “Almost, but not Quite: Buta Ranquil – Zapala”