After defending my PhD last week I had some holiday and it was time for the next training round. This time I would go from my apartment in the German Ruhrgebiet to Winterberg and back. Winterberg is located in the Sauerland, a well known hilly region to the south east. I planned to use a combination of long distance bike routes on this trip. 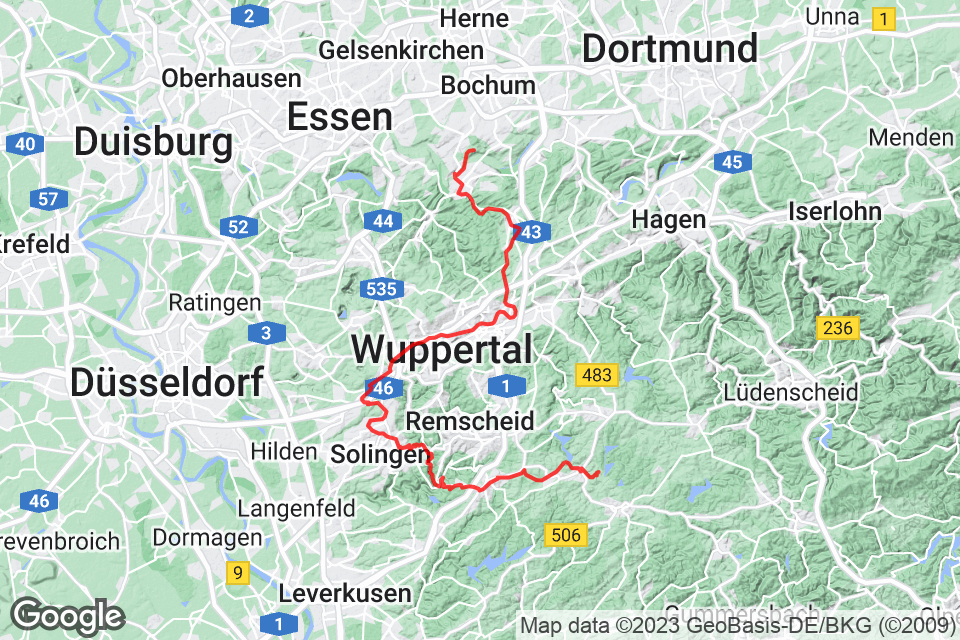 I started off on the Bergischer Panorama-Radweg, running from Hattingen to Olpe. A lot of it is uphill, but it consists in large part of former railway lines converted to cycle paths. This means gradual climbs at 2% grade or less, which I really prefer to the steeper climbs.

Off to a good start, I quickly reached Wuppertal, which has a really nice east-to-west cycling route running high above the city. Continuing on, the route passed under the Müngstener Brücke, a very high railway bridge which is still used during its renovation. However, I had to cross the Wupper using a different method of transportation: A hand-powered “ferry” which actually was a car running on two cables suspended above the water. 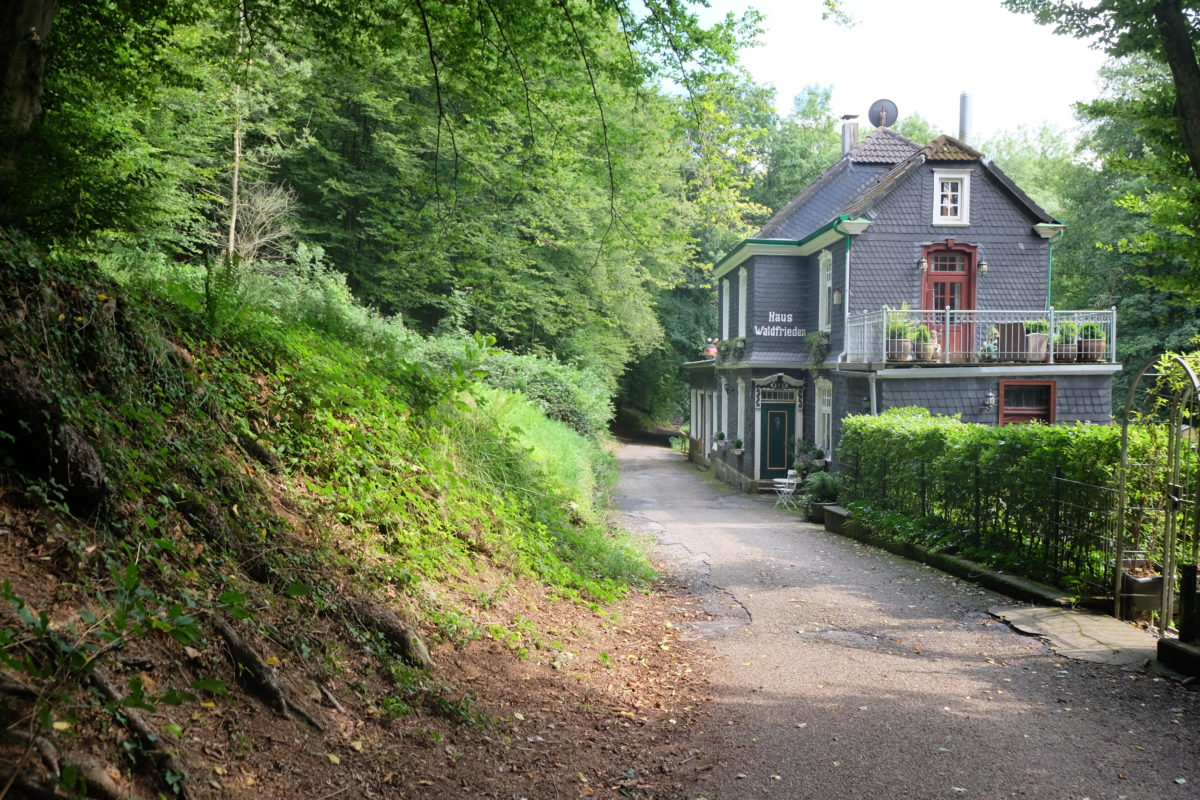 Some time after that, the ride got a lot harder, with some steep climbs near Schloss Burg and going up and down quite a bit after that. Near the Bevertalsperre, I called it a day and camped at a campsite on the shore of the reservoir. 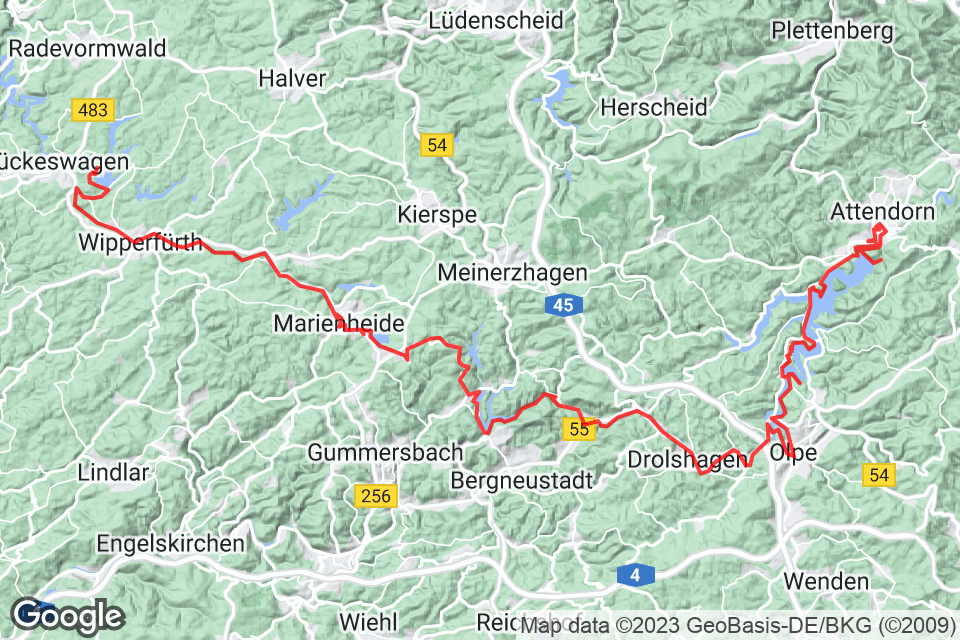 The next day was much like the previous: A lot of gradual climbing with some harder parts in between.

During lunch at a nice bench, a Polish van stopped and after the driver relieved himself in the woods, he started asking me something which I didn’t understand. He seemed to know only two words of German and I couldn’t get the point across that I don’t know anything there. After hanging around for a while, he left and I still had no idea what he wanted. 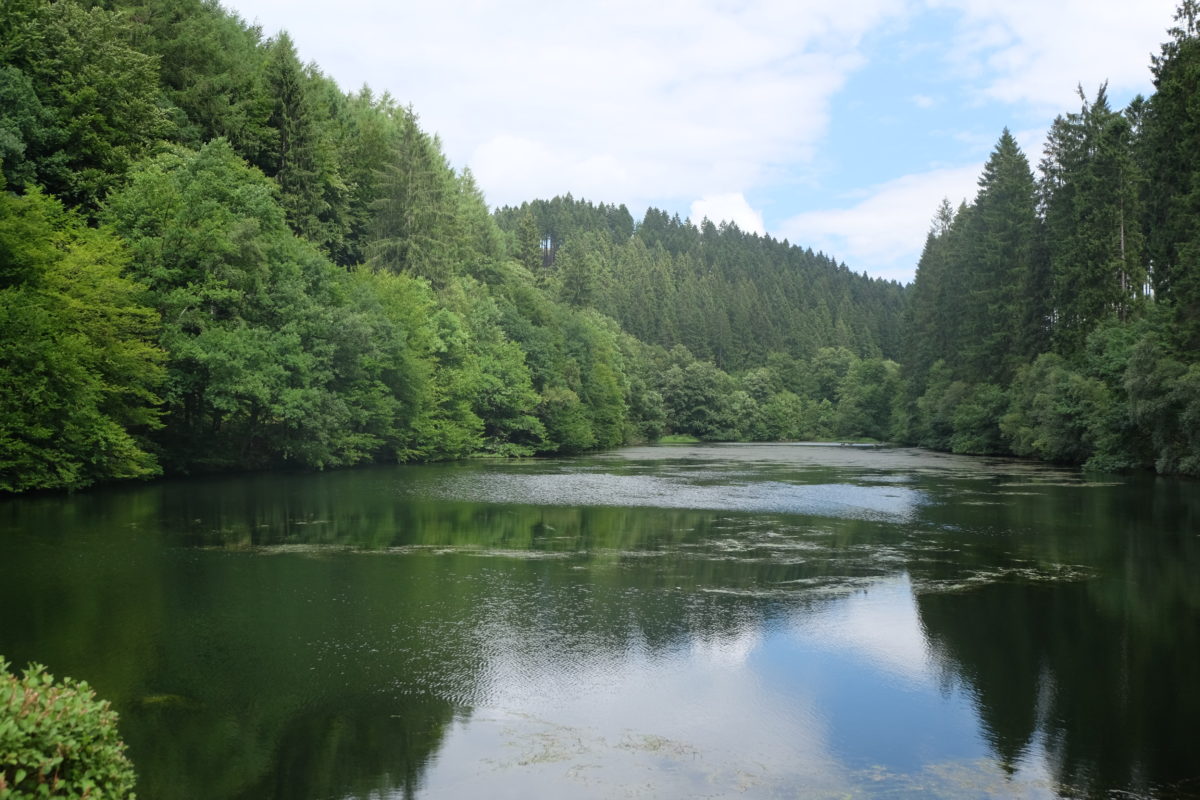 The scenery stayed nice and eventually I crossed through Olpe and continued on the next cycling route, a portion of the Ruhr-Sieg-Radweg, which took me along the shores of the Biggesee, one of the larger man-made lakes in the region. Because of some road closures and detours it took me a while to find my campsite, but eventually I found it and camped for the night. 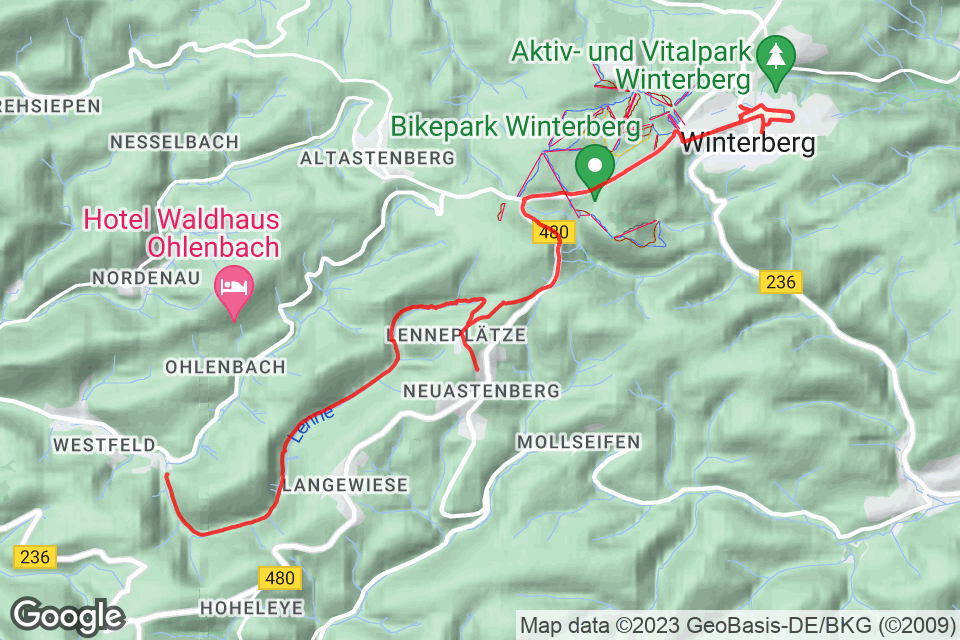 On Saturday it was raining when I woke up and it stayed that way during the morning. It was steadily getting worse, but just as I decided I had to get going anyway, it mostly dried up. After packing my tent and some other stuff wet, I got on the way with the goal of reaching Winterberg today. The weather was mostly fine, with just some occasional drizzle. Today’s ride would be on the Lenneroute.

Things were going well, although I was running low on battery for my phone and the bike computer I use for navigation, because my cheap China-made power bank had finally broken. Just following the cycling signs to the next town over generally worked well, until I got to the final stretch between Westfeld and Winterberg. This was about 10 kilometers and all would be well, right? Right?

Well, not so fast! Initially all was well and I made some nice progress on a gentle uphill. At some point the road even went from good gravel to even better asphalt. Then the asphalt stopped again, the road quality got worse and the grade got steeper and steeper.

Soon I was pushing my bike uphill and then I started seeing walking signs pointing to Kahler Asten, just a few hundred meters away. So without planning to, I was climbing one of the tallest mountains in the region, with a fully loaded touring bike. After pushing a few kilometers and getting to just below the top, I could get to a village with a real road and my torture was over.

The advantage of climbing above 800 m was that I now had a nice downhill ride into Winterberg, where I found a hotel, had a nice dinner and dried my stuff that was still soaking wet from that morning. 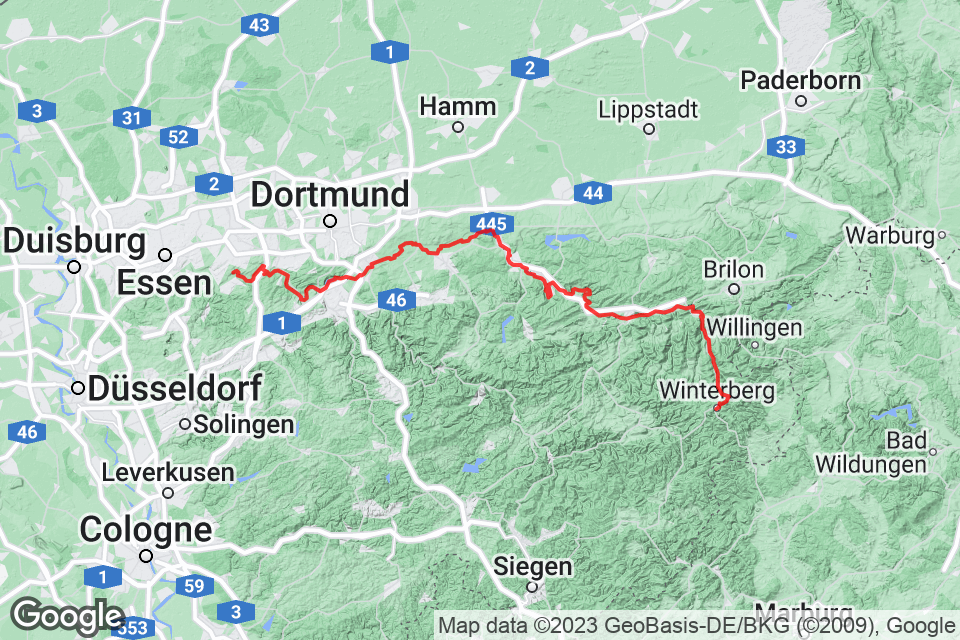 I planned to ride home along the Ruhr river, which has its source just outside Winterberg and flows close to my apartment. I wanted to see if I could do the ride in one day, though it would be a bit of a stretch at 166 km. First order of business was a short climb up the hill where the source is.

From there it should be a nice downhill ride along the river on the well-known Ruhrtalradweg. However, the planners obviously had a different idea, since the path would occasionally run higher up in the valley. This is great for the view, but it meant that there were quite a few nasty short climbs to master. 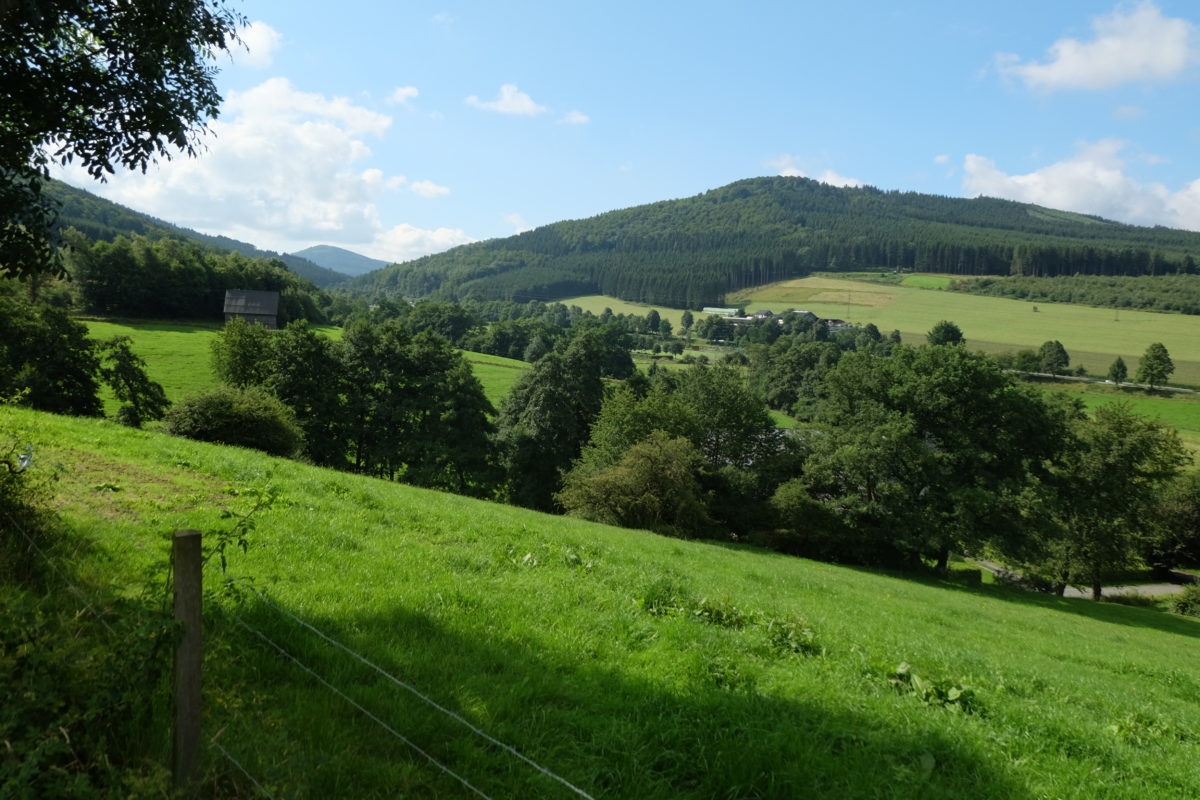 Eventually, the route flattened out and I could make some better progress. But of course there is one thing the Germans are really particular about: There can’t be any cars on the cycle path. This obviously has to be enforced by erecting all kinds of poles, fences, gates and other measures. Combined with some sharp blind turns, this means you can’t just keep the pace up. I’m also suspecting that my bike’s rear derailleur isn’t properly set up, so all in all I was still going slower than I wanted to go.

And then there’s the final hurdle: My apartment is about 100 m higher than the Ruhr valley, so after riding all day I had a final steep (up to 18%) climb waiting for me.

Finally, at almost 21:00 and spending almost 12 hours on the road I got home and had a well-deserved beer.

Again, a nice ride of about 420 km in 4 days. My climbing skills seems to be improving a bit, but more training would be nice. Oh well, that will have to come on the road then. Also, my bike needs to be checked thoroughly before I leave on the big trip to make sure everything is in order.