In the long weekend of pentecost I went on a trip to Monschau, a well-known city in the Eiffel region in western Germany.

On Saturday I started off at my parents’ home in the southeast of the Netherlands, where I keep my new bike. I was off to a good start with some nice views along the route.

However, as I got into the hilly parts of South Limburg, I noticed that my climbing skills are not up to par. I hoped to do about 100 km today, but after about 80 km I had to give up and camped in Vaals.

This was the first night with my new camping gear, which generally worked perfectly. In particular the tent, an MSR Elixir 2, was put to the test right away, as it was raining lightly for most of the night. Luckily, it didn’t rain during daytime or in the evening while i was cooking outside the tent. 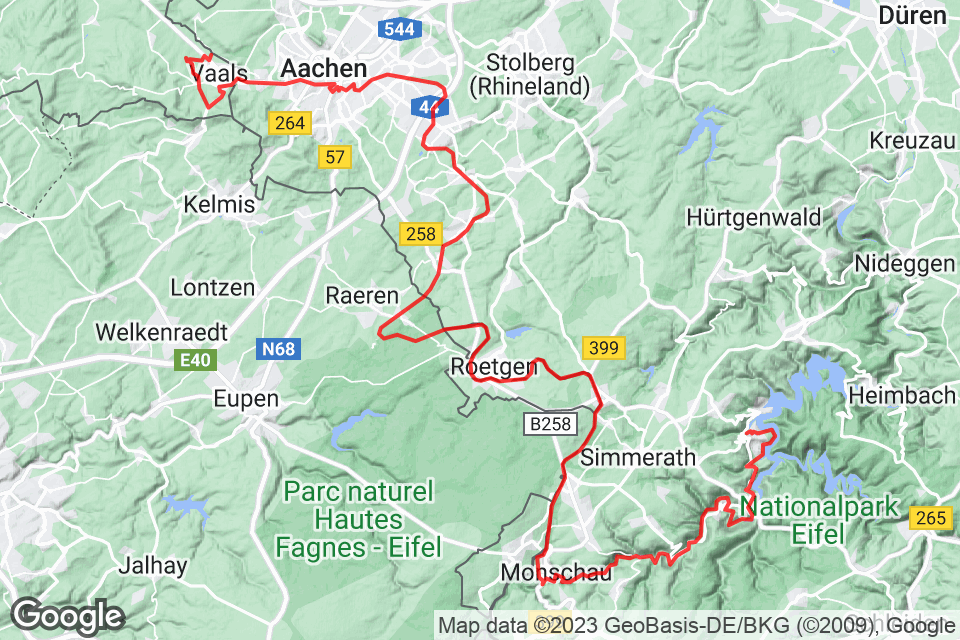 On Sunday I wanted to get a bit past Monschau. Since I didn’t feel great about climbing a lot of steep hills, I decided to detour through Aachen and use the Vennbahn route. This is an old railway from Aachen to Luxembourg that is converted to a cycle path. I still had some elevation to gain, but this being a railway, the grade was never larger than 2%. After 40 km of steady but easy climbing, I reached the top and a steep and slippery descent brought me into Monschau. The historical old city is a huge tourist draw and this Sunday in an extended weekend was no exception. The only way through was on foot.

From here I would follow the Rur/Roer river all the way to its confluence in the Maas at Roermond. On average I would be descending here, but the initial part still had some short climbs, occasionally on challenging tracks in the woods. When I arrived at the Rursee reservoir I called it a day and camped out there.

Monday I had a long ride ahead of me to get back home. In the previous days I had fallen behind schedule a bit, so I had to make it up today. However this was by far the easiest part of the route. Initially there were a few small hills, but they quickly evened out and it was just a nice flat and easy ride to Roermond and home from there.

All in all I did about 300 km in 3 days and I’m quite happy with how my new bike and camping gear performed. I do however need to work on my climbing skills for the big trip ahead. A new ~5 day training trip is planned for early August.