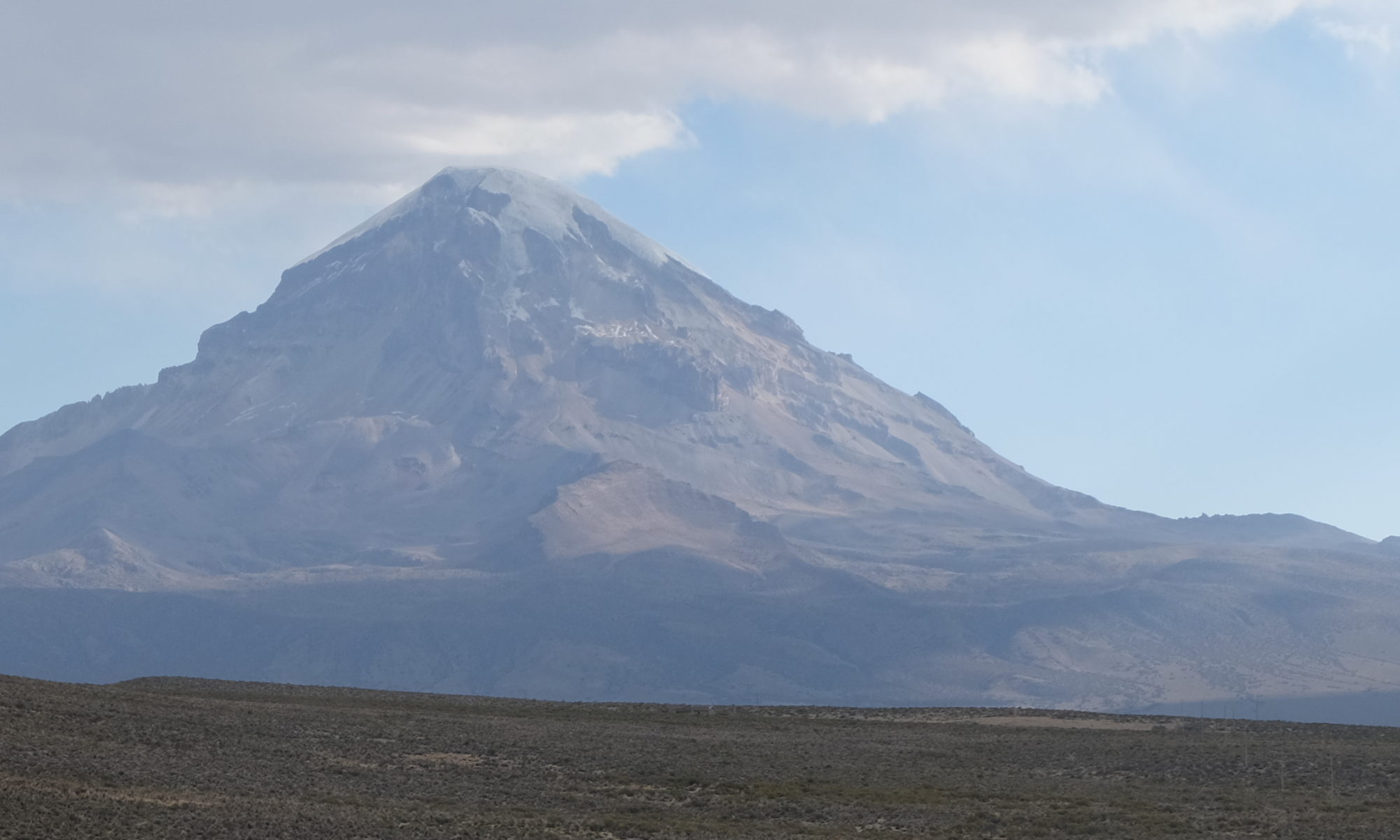 For the first days of my tour I’m on a quest to the Lonely Mountain in order to beat Smaug the dragon and retrieve some lost dwarven artifacts.

No wait, that’s another lonely mountain. This one is Volcan Sajama, at 6542 meters the highest peak in Bolivia. No dragons live there as far as I know. Still, the mountain is pretty lonely and completely dominates the landscape from many directions and at great distance.

One other difference to Bilbo’s journey: I don’t plan to go there and back again. In his words: The road goes ever on and on. 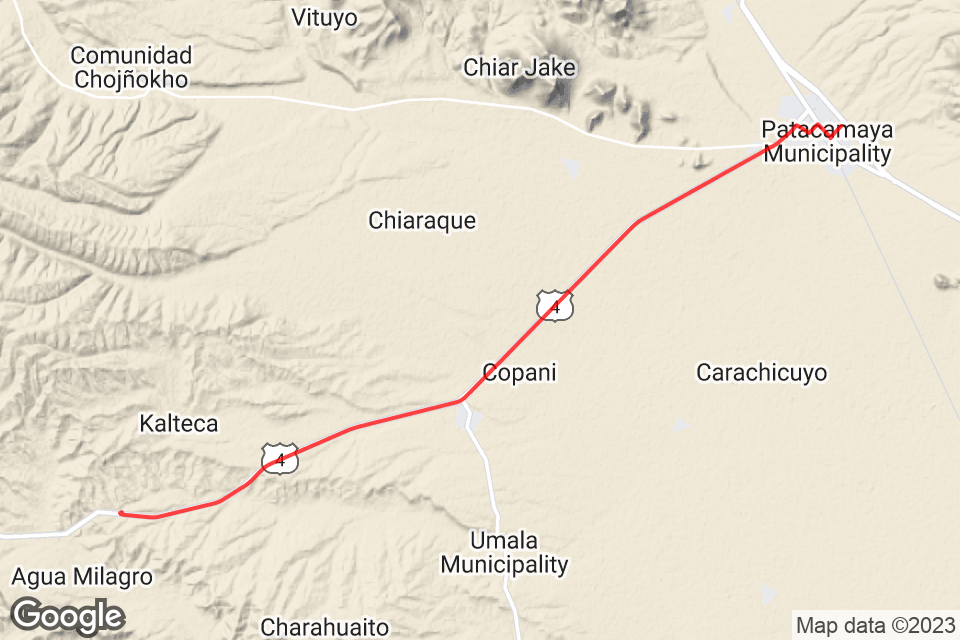 At the end of the previous post, my bus was leaving La Paz. After climbing to the satellite city of El Alto, it made a long stop to get it filled up. While we were there people from the bus company were loudly shouting the destination “Oruro Oruro Oruro” in the hope of selling tickets, while street vendors were loudly announcing their wares so the people on the bus could get out and buy them. After we left that stop, a balloon artist showed his skills on the bus to entice passengers to buy his instruction DVDs.

The bus dropped me off at the outskirts of Patacamaya, so after loading up my bike I rode to the center to have lunch and buy some last food supplies. Right when I left the town along the highway heading to Arica, Chile, I could already see Sajama in the distance. I also had to stop right away to fix a few things I had not properly set up when I reassembled the bike in La Paz. However, so far this is the only problem I’ve had with it. *Knocks on wood.*

The start was quite heavy: the terrain went up and down, but mostly up, there was some headwind, I hadn’t trained properly, the air was still thin and getting thinner and there was traffic overtaking me, sometimes way too close and way too fast.

I stopped about an hour before sunset to set up my first wild camp (I did camp with my bike on camp sites before). At this point I had cycled only 30 kilometers. The camp was not entirely optimal, but I didn’t want to look any further. I also didn’t want to cook anymore, so the dinner of champions consisted of bread with peanut butter. The often mentioned cold nights on the Altiplano didn’t affect me at all. In fact I was quite warm during the night, but that may just be me overpreparing by wearing clothes and a warm hat inside the sleeping bag. 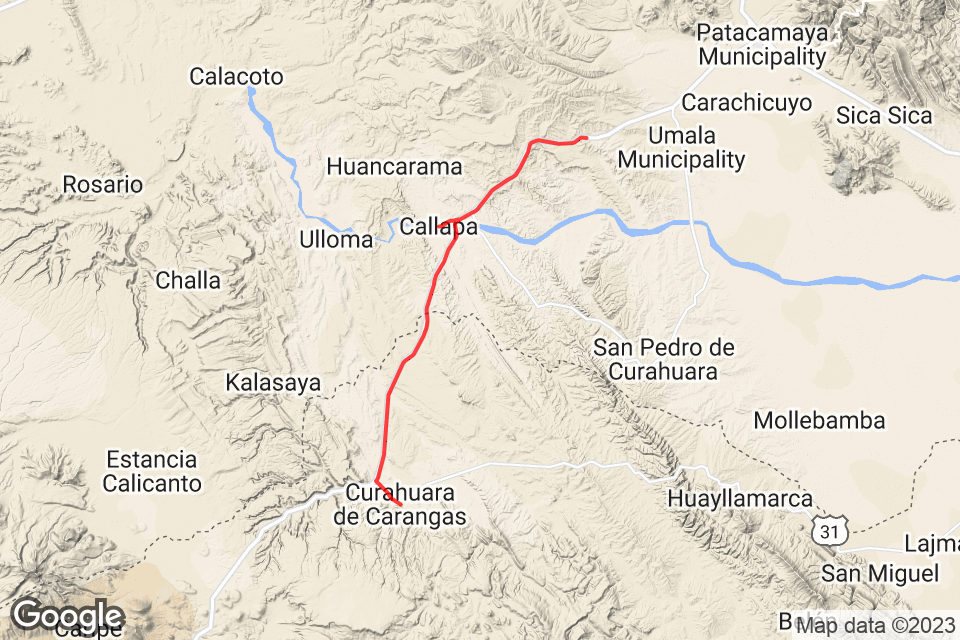 On Monday I rose with the sun and thus started early. The ups and downs on the highway continued, but soon they were mostly downs as I headed to a river. Just before that I made a short detour to the village of Callapa to fill up on water and juice. Only after I put the “water” in my Camelbak did I notice that it was actually some lemon-flavoured drink. That taste will take some time to come out I guess. The village square was nice though.

When I stopped at the top of a hill to eat something a local farmer quickly approached me. First he wanted to know in broken Spanish (yes, even I could identify that. At least he compensated by speaking louder) where I came from and where I was going, then he left to get his own bike, which he proudly showed to me. Then he told me his bike cost 100 Bolivianos and he wanted to know what mine cost. I lowballed it and said 10,000.

At the end of the day I again left the highway to find accommodation in Curahuara de Carangas. I stayed in an alojamiento, a room that people rent out to sleepers. This one was literally just a room with a bed in it and a toilet I could use downstairs. By the way, in Bolivia you don’t flush toilet paper; instead you throw it in a bin next to the toilet. At least I slept in a bed and I could get dinner in a restaurant: A room with some garden tables and chairs with one menu option, fried chicken with bland rice and very badly fried potatoes. But you do get to choose which piece of the chicken you want.

The weather during those days was excellent. Only sun, not a cloud in the sky and a nice temperature for cycling. The air is very dry though. 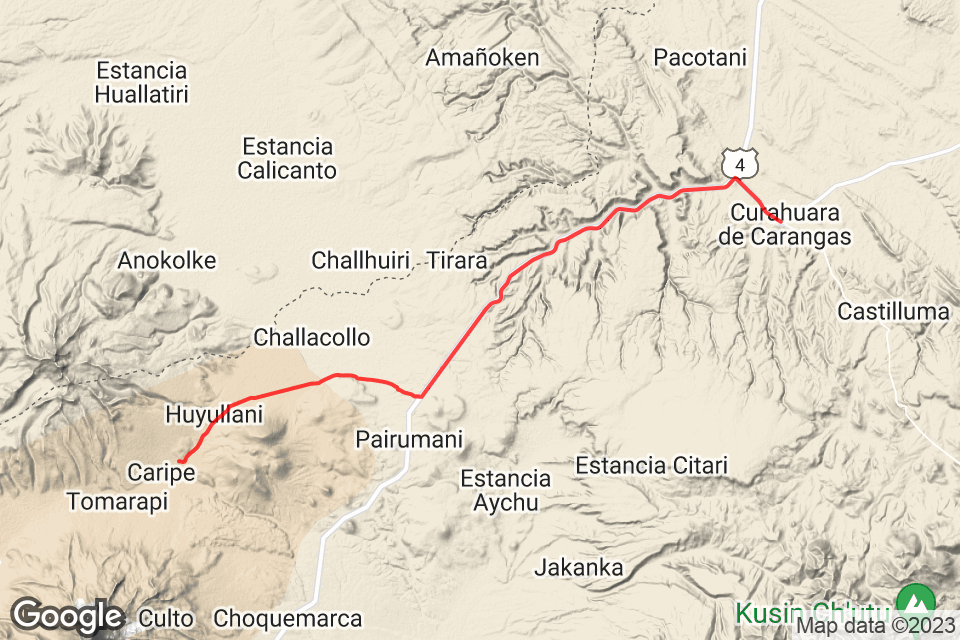 Tuesday started with a nice gentle climb, but later it got pretty steep and I was pushing for a while. At least I was not the only one having trouble here: many trucks were also crawling up the hill. On this stretch I also saw the first lake with flamingos. Then the road evened out on a plateau where it went gently up and down and I could clearly see Sajama.

Then I finally left the highway. Initially the road was easily ridable, if a bit uneven. The were some nice rock formations. I rested under one and made mate: Tea brewed from coca leaves that supposedly helps against altitude sickness.

However, soon after this the road quality deteriorated and consisted mostly of loose sand. Thus I was back to pushing for quite a while. After passing a few more or less deserted villages, the road joined with another and improved to the point of being ridable. Here I saw a pair of tracks which I thought belonged to a touring bicycle and I even saw someone moving slowly in the distance. I could not catch up with them, since my legs were done for the day. Later I noticed they were actually two pairs of tracks.

So now I was forced to wild camp again. The problem was that I hadn’t planned to camp this night and my water was running short. With some careful rationing I made it to the morning, even managing to cook pasta. The spot I picked was in principle nice. It was close to a farm, which looked deserted to me. I quickly learned it wasn’t. As the lady was bringing her llamas in, her dog found me. The lady shouted some angry words I didn’t understand and left me again.

I was now at 4250 meters of altitude. As the sun set, a strong wind started to come down from the mountain and stopped again after a few hours. At that point it became very quiet. It was a bit colder than two nights before, but I was still fine. The little water I had left didn’t freeze, though I noticed in the morning that some small streams had frozen over. By the way, I didn’t see any streams the day before. Otherwise I would have collected water from those. 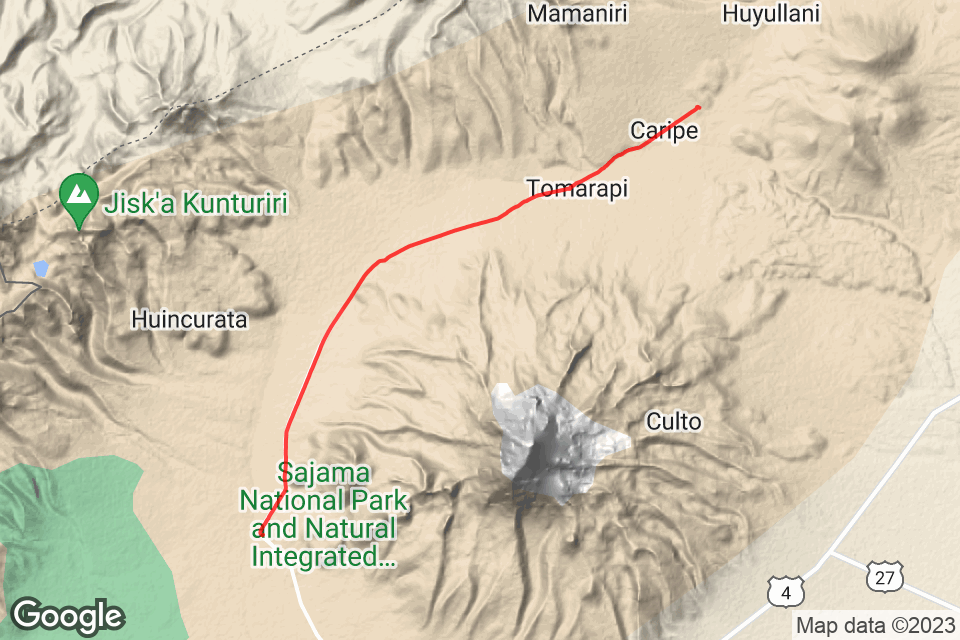 This night I didn’t sleep much and so I rose before the sun and left shortly after 7 without seeing any farm activity.

So now Wednesday was supposed to be a short day. Only 25 kilometers were left to the village of Sajama, in Sajama National Park, near the volcano named Sajama. I still had a bit of climbing to do to a little pass at 4400 meters and then I could easily descend to the village. I could even visit the hot springs along the route, right? Wrong.

The road got much worse and again I was back to pushing more than riding. I soon reached a village I knew has a nice inn, so I got an excellent breakfast there, including very good juice and loads of mate. Only at 2 o’clock had I completed the 25 kilometers to Sajama.

At this point I was cursing Bolivian dirt roads and also other cyclists who called this road “mostly ridable” on the internet. I’m afraid that the rest of my route in Bolivia will turn out the same or worse. I’m taking a rest day in Sajama to evaluate my options.

My hostel has a set meal at 19:30. Soup, quinoa with meat and mate. Quite good for 25 Bolivianos. There are certainly cheaper options, but this is the best food I had since leaving La Paz.

On the rest day I walked to the hot springs I skipped the day before. In hindsight I’m glad I did. They are much further from the road than I thought and the final approach would be very tricky with a loaded bike. It did take me through a meadow with llamas, alpacas and vicuñas. The pool was perfect though and I soaked in it for several hours. It is nice and warm and has great views of the surrounding mountains. There were quite a few dirt devils and sand tornadoes passing by and one of them took my cool new hat that I bought in La Paz. The way back felt long and was very windy. I got a bad sunburn which made me sick in the evening.

One Reply to “The Lonely Mountain: Patacamaya – Sajama”