As I was walking to a restaurant I saw a bunch of people all looking at the same storefront. The store sells electronics and all the TVs were showing a football game. The salesmen inside were also just watching the game. 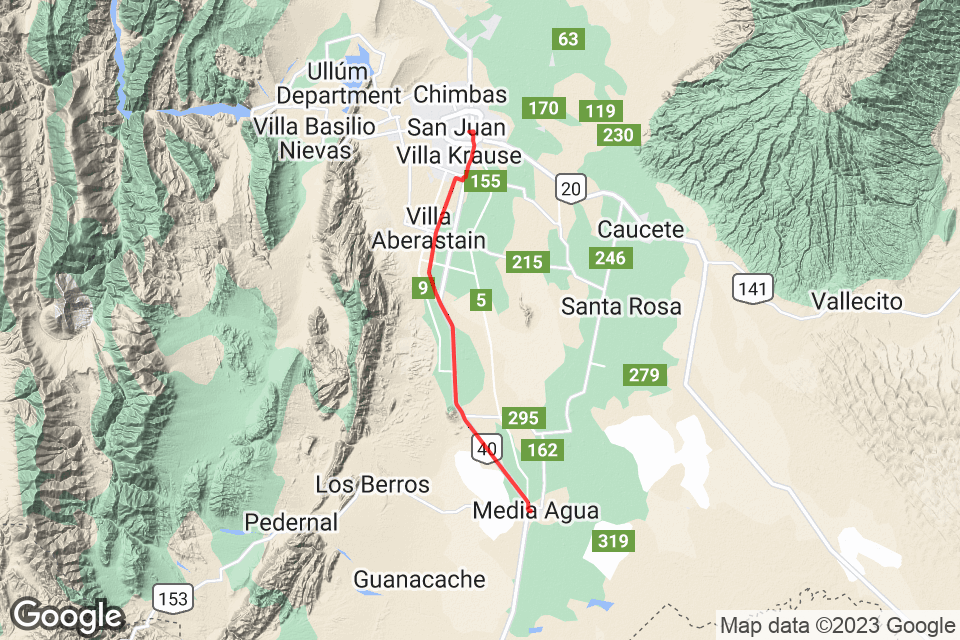 Wednesday I left San Juan on Ruta 40. Just like when I entered the city, there soon was construction work and traffic was diverted onto another road. When the diversion ended I stayed on this road, as it was a nice tree-lined road with little traffic after everyone returned to the main highway. On the side of the road are an increasing number of vineyards and wineries. I’m clearly approaching Mendoza. The grapevines are still small, but in just a few months they will be ready for harvest.

In Media Agua I met Cyrille again, who arrived earlier and made a tour of the town. The only hotel was very expensive and the hostel was bad according to him, so we went to the campground. We were the only people there, so we could take a nice spot with shade, water, and power near our tents. There is a swimming pool, but no water in it. A pity, I would have liked a swim.

The main building was used for various activities. There was a dance class in the afternoon and in the evening people were playing a foosball tournament and various sporty activities were in progress when the municipality decided to take drastic anti-mosquito measures. Within a few minutes the whole field was filled with funny-smelling smoke and all activity stopped. According to the owner there’s no danger to anyone but mosquitoes, so that’s good then I guess. 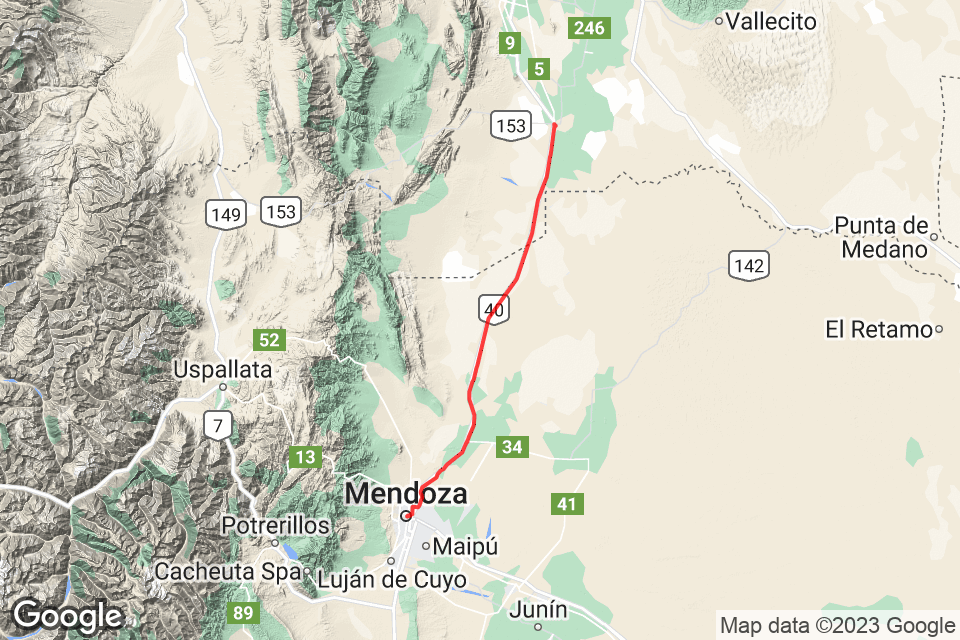 We had breakfast at a fuel station before starting south toward Mendoza. Initially the road was good and though we soon left the villages behind, houses and farms still lined the road. After some 10 km these were gone too. The road narrowed to one lane per direction, the landscape became barren and the wind was again out in full force, slowing our progress.

My goal was to ride some 110 km to the center of Mendoza for a double rest day, while Cyrille didn’t want to see another big city and thus wanted to stop in the first village after 70 km. About halfway there we parted ways, because I would need to go faster to complete the ride at a reasonable time. Though we’re both headed for Bariloche I doubt we’ll meet again, as his schedule is much more relaxed than mine.

The rest of the day was largely battling the wind. When the series of villages started they would occasionally shield me and allow me to leave the highway for a bit.

I again stopped at a fuel station for lunch. The rest of the ride was fine and I arrived at my hostel in central Mendoza just before 16:00. However, there was a problem with my booking there. I booked a private room and they reserved a bed in a dormitory for me. Long story short: they blame booking.com for offering something they don’t have at a price that is “impossible”and they couldn’t offer me anything other than a dormitory bed. Their shifting the blame is unjust in my view, it’s the hostels fault for making the wrong connection between the two computer systems.

I checked online and reserved a room somewhere else and went there instead. When I got there and someone let me in, there was no one to actually check me in. The place seemed nice and I sat down on their very comfy couch for a while. The people had seen my reservation come in and so they arrived soon after me. I have a nice room already and if another group doesn’t show up they’ll upgrade me to an even better one, so I’m happy.

That evening I had some beers at Hangar 52, a rather interesting place. There are about 40 beers on tap, with the exact offers changing all the time when a beer runs out. You can try any of them before you buy. Everything is 80 Pesos per pint, with 2 for $100 during happy hour. I also had an interesting talk with some locals. They told me there are many local breweries in addition to the wineries that Mendoza is famous for and advised me to try some of those later.

For dinner I had something completely different: Paella. I was getting a bit tired of the standard milanesas and hamburguesas and you can’t have beef every day. Well you can, but it gets old too and it’s quite expensive. I also had something else I hadn’t had yet: White wine. Even though I tried some of the world-famous Malbecs close to their source I still like this one better, and of course this was a local wine too.

The next morning I went on a walk through the city for sightseeing and shopping. I finally found a bite valve that will work with my Camelbak. In general I’ve found quite a few supplies I needed.

The Mendoceneans (apparently that is the correct demonym for someone from Mendoza) make sure to mention that their city is located in a desert even if it looks like a forest. This is thanks to a massive irrigation system that keeps all the trees lining the streets watered. The amount of water that flows through the city is enormous and all of this is fed by meltwater running off the nearby mountains.

In the west of the city is a large park, which I visited in the afternoon. At the end is a hill which in principle has a great view of the city and the mountains on the other side, but from the top you only see trees. Fortunately you still get the views on the way up. On top is a large monument commemorating a military campaign that crossed the Andes to free Chile from the Spanish some 200 years ago, as a step towards conquering Lima and thus freeing all of South America.

On the way back into the city it was past 17:00 and so the shops were open again. I completed my supply run before returning to the hotel, where I spent a few hours carefully planning the next few weeks on a day-to-day basis. The route to Bariloche has some desolate stretches, so it’s important to know distances between towns. In the end I don’t think I have to go more than two days without at least seeing some kind of services. This also means I should carry more food and water from now on at least until I leave the desert at Junín de los Andes.

The steak I had for dinner wasn’t too bad, but the restaurant took its time to write up the check. They needed more than half an hour to add up a main course and a beer after I asked them multiple times. For the second time in Argentina a restaurant completely forgot about the starter I ordered, in this case a pair of empanadas. When they finally brought me the check they had manually subtracted the cost of the empanadas, but also manually highlighted the part that suggested a 10% tip. Seriously, after all this? Then when I left the waitress came after me, saying I paid too little. I had to point out to her that the amount was manually lowered, even if she pointed out the same to me not five minutes ago.

The main reason for my double rest day in Mendoza is that I want to visit some wineries, so that’s the plan for Saturday. The cheapest and likely most popular option (at least among backpackers) is by bike. However, it is my rest day and so I didn’t want to bike. Instead I booked a tour on a bus where you have some freedom to select the wineries on the route you visit, based on a hop-on hop-off system. At least that was the theory, in practice the whole group stayed together for most of the day as we all had very similar routes thought out. The advantage of this is less waiting and we managed to squeeze in an extra visit as a result.

The first winery was Dante Robino, which makes several sparkling wines in addition to normal ones. They explained the whole process of making this wine, but most of the time not much is actually happening at the winery, since they’re just waiting for grapes to grow and the wine to mature. We tasted a few wines, including a naturally sweet sparkling wine. I don’t usually like these, but this one was very nice. I would have bought a bottle or more, but I can’t take it with me on the bike.

At the next winery we received a glass right at the start, so we could enjoy it while out in the vineyard listening to the explanations. We also tasted an unfinished wine from the tank and another one after the tour.

Before lunch we made an extra stop at a farm that produces olives and derived products, a few of which we tasted. I don’t care for olives or olive oil, but they had some nice things too.

Lunch is where the group actually did split up. Some people went to a fancier place, others were only on a half day tour and returned to Mendoza. I was at a supposedly less fancy place, but the lunch was still excellent. The main course was beef rib and it was certainly much better than the previous time I had beef rib while bike touring back in Czechia. Of couse a few glasses of the bodega’s own wine were also included.

After lunch we visited one more winery where we had a tasting. We didn’t see any of their facilities and so I found this the least interesting. After that we returned to Mendoza, where I again retreated to the hotel for a bit. All in all it was an interesting and easy day, which I really needed. Yesterday might have been a rest day, but I walked a lot and I could clearly feel that in my legs, though in other muscles than usual when cycling. That night as I was having a pizza I ate almost all of the olives on top, so I clearly learned something today.